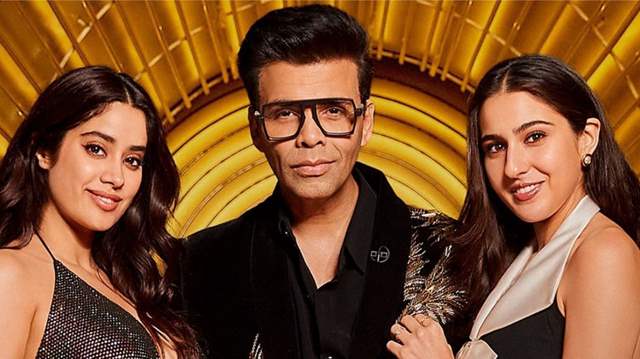 The 7th season of Koffee With Karan started off with a bang with Rocky Aur Rani Ki Prem Kahani stars, Ranveer Singh and Alia Bhatt gracing the couch and dishing dirt off their personal lives.

The episode already got fans excited about the season and it was a perfect kickstart to the most talked about and loved talk show. While, the episode ended on a satisfying and entertaining note, viewers kept pondering about the upcoming promo and who will be the next guests.

Well, now the wait is over as Karan Johar has dropped a promo clip introducing his next two guests, Janhvi Kapoor and Sara Ali Khan. In the promo the actresses were seen spilling beans on their bond as well as their dating life.

In the clip, Sara was seen saying that she would like to date Vijay Deverakonda. Sharing the video, Karan captioned it as, "Two of my favourite girls at their unfiltered best!🥳 Get ready for episode 2 of #HotstarSpecials #KoffeeWithKaranS7 streaming from July 14 on Disney+ Hotstar!"

Sara Ali Khan and Janhvi Kapoor's bond has been a topic of discussion many times. The duo shares a great camaraderie and their trips and workout session together have always enthralled their fans.

For the unversed in the previous episode of KWK7, Alia Bhatt took the cat out of the bag and told the world how Ranbir Kapoor proposed her. She also talked about her bond with Ranveer and how he the one who motivated her for Gangubai Kathiawadi. Ranveer also shared his wedding night secrets and showcased his hidden mimicry talents to the world.

Talking about Sara and Janhvi's professional engagements, Sara has a bunch of projects in the works. She will be next be seen in Laxman Utekar's untitled film with Vicky Kaushal and 'Gaslight'. Meanwhile Kapoor is revving up for 'Good Luck Jerry' which will be releasing digitally on 29th July.

+ 3
2 months ago Looks like Karan himself gives then and what to say.. that’s y same people of nepotism r only comg for this stupid show