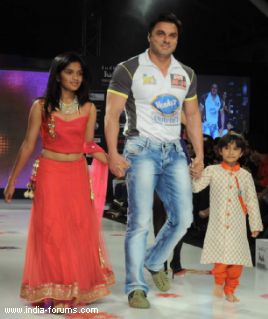 Filmmaker-actor Sohail Khan, who recently walked the fashion runway at the India Kids Fashion Week here, says if children get a platform to showcase their talent, it helps them gain confidence.

"There is nothing wrong in it (letting kids show their talent), it only increases their confidence. That's why we even have dramatics in school, the kids grow up and open up to the world and get some kind of confidence in them," the 41-year-old said here at the India Kids Fashion week.

"Today I was backstage and saw the kids, all of them were so adorable and sweet, they get our childhood back," he added.

"A lot of people, thankfully, with generosity have become charitable, which is great. If you earn money, you should also contribute some to the society. It's even tax-free. So I would say, earn from the rich and give it to the poor," said Sohail, whose last film as a producer, "Ready", garnered accolades.