Sudhir Mishra’s ‘Khoya Khoya Chand’ recreates the Bombay film industry of the fifties and the sixties beautifully.  Everything from the sets to the costumes to the overall feel is in place. Coupled with beautiful performances by a competent set of actors, the film does manage to leave an impact.

Aspiring actress Nikhat (Soha Ali Khan) dreams of making it big. And she manages to do so when superstar Prem Kumar (Rajat Kapur) takes her under his wing but not before getting what he wants from her.  On the other hand there is budding writer Zafar (Shiney Ahuja) who has had a strenuous relationship with his family. He too has dreams to fulfill in the industry. Nikhat and Zafar meet,fall for each other and he helps her to be on her own, minus Prem Kumar’s help. They plan to marry but Nikhat’s family who lives off her money is not ready to let go, same goes for the producers whose films Nikhat has signed. Misunderstandings galore and ego hassles leads to the  downfall of their relationship .

Rattan Bai (Sonya Jehan), a fading star steps into Zafar’s life and Nikhat goes back to signing films with Prem Kumar. The demise of the relationship has an adverse effect on Zafar and more so on Nikhat. 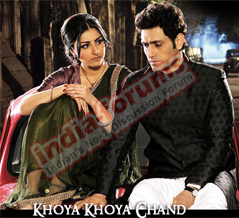 Along with the film, a lot of things shown in the film look real to life.  It kind of delves into the film industry’s underbelly. Parents pushing their daughter towards the silver screen so that she supports the family monetarily seems quite real. Neither friends nor enemies are permanent in the industry. The give and take syndrome too has existed for long and the films shows the same.  Misunderstandings exist in every relationship, especially when the pressures ad stakes are so high. The heroine who works and is stressed out round the clock owing to pressures, suffers from a hole in the heart. There are lots of references from real life in the film. Even a silhouette scene has been recreated with look-alikes of Guru Dutt and Johnny Walker.

The bygone era has been captured very well, thanks to the production design. The costume designers too do a fabulous job. The camerawork is exemplary.

Soha Ali Khan is effortless and proves that she is a fine actress.  The film showcases her talent well. Shiney Ahuja suits his role. Rajat Kapoor performs well. The other actors- Sonya Jehan, Vinay Pathak, Sushmita Mukherjee do well.

Though there are some dragging moments, the film as a whole should appeal to lovers of meaningful and serious cinema.