View Profile
Cape of Good Films Private Limited and Shree Ashtavinayak Cinevision's 'Khatta Meetha' is principally a political satire on the municipal and construction dealings in India told through the life of a contractor, "Sachin Tichkule" played by Akshay Kumar. 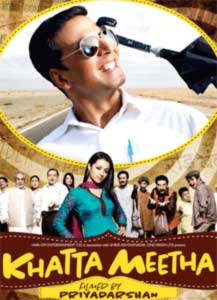 kshay famed for his hot blooded Punjabi Munda roles makes this smooth transition with this comic caper directed by Priyadarshan. The dynamic duo who are known for their knack of striking gold at the box office with blockbusters like Hera Pheri, 'Bhagam Bhag' and 'Bhoolbhulaiyaa' are all set to create magic once again with their latest movie Khatta Meetha.


Trisha, who is making her Bollywood debut with this film, has acted in over 30 movies down South. Infact Priyadarshan had given Trisha her first break in a Tamil film called 'Lesa Lesa'.


The film unfolds, revealing the various facets and levels of bribing and crooked tricks required for one to survive the system. As Akshay continues to chase his dream, he comes to a crossroads at a point where he has to decide to be honest himself and ultimately expose those who have wronged even if it means his own brother and family.


The comman man's look that Akshay is donning in this laugh riot is something he has never sported before. Styled by Shabina Khan, the ensemble consists of pastel colored shirts with trousers, chappals, a money pouch, an umbrella and Aviators.


The Cinematography for the film is done by V. Manikandan. The music score is given by Pritam while the choreography is done by Pony Varma, Prasnna Sujith, Ganesh Acharya. The Art Director is Sabu Cyril and the co-director is Abhilash Nair.


'Sajde Kiye', the song is a lovely romantic track shot a song in the famous Ram Mandir in Phaltan, Satara. The beauty of the song is the pious location where the Mandir Ghanti would ring at precisely the same time as the Azaan from the Mosque.


The song 'Nana-chi Taang' combines the melody of rock with a tinge of our very own Maharashtrian tadka. Movie's most controversial track 'Bullshit' is aimed at corrupt politicians and pokes fun at them. It trails the existing state of affairs with respect to shoddy construction work, slow proceedings and traffic woes. And lastly the track 'Aila re Aila' which is a typical koli song full of masti and masala picturised on Akshay and Kainaat Arora.


The movie is shot in Mumbai while several portions of the movie at a palace in Phaltan, the ancestral home of Shivaji's first wife, Saibai.


The film is been presented by Hari Om Entertainment Company in association with Shree Ashtavinayak Cine Vision Limited and hits theatres on 23rd July, 2010.