View Profile
While news of an impending divorce may be rife, Karishma Kapur does not cease to step right back into her glamor shoes as promised post her second delivery last summer.

A shinning golden brunette, Lolo appears on the cover page of the January-February 2011 issue of women fashion magazine, Harper's Bazaar.

In a candid comeback interview she goes on record to reaffirm plans of returning to tinsel town, of fitness mantras, of juggling between Delhi and Mumbai, as well as the roles of a mommy and a star. 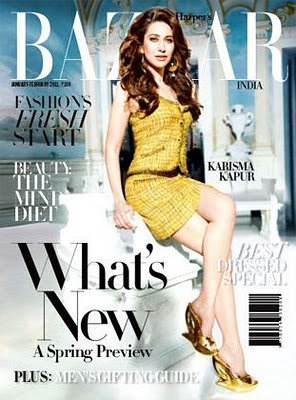 Has life in Delhi not been her thing? Karishma quickly stashes all such rumors and asserts the capital city to have treated her well, found her a couple great friendships, as well as tempted her with yummy food at all times! Yes, she does pointedly avoid any talk about her married life, and rumors of its finally and fully falling apart.

Unlike her once zero size younger sibling, Kareena Bebo Kapoor, Lolo vouches for regular workouts over power yoga, and insists that the former only needs more patience.

As for her comeback, scripts have been offered, and the pretty and popular actress is scanning them carefully to be certain of coming back with a bang!