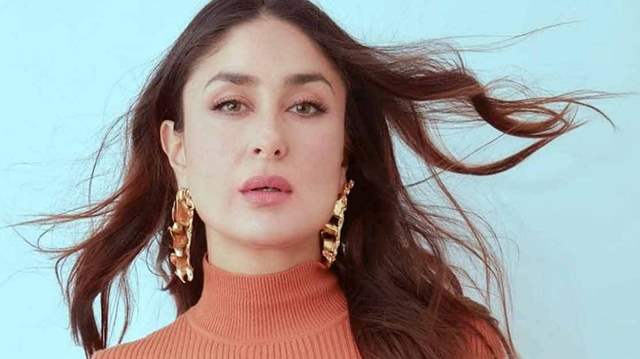 It goes without saying that Bollywood actresses have unfortunately had to face one form of body shaming or age shaming to another in their career span. With evolving social media and netizens throwing away their opinions, it gets much more difficult for the divas.

Since the past few hours, pictures from Karan Johar's 50th birthday bash have been making rounds on social media and fans have been making various kinds of remarks on the actors, their looks and their dresses.

But looks like Kareena Kapoor got her eyes at some of the negative comments and she decided to take a did at the trolls and age shaming comments. Sharing a screenshot of the comments in her Instagram story wherein we can see a user's comment 'Buddhi' on her picture Bebo wrote, "I keep seeing this on comments! if and when I bother to check, unless its the one that comes up on top! So... buddhi is meant to be an insult?? cos for me its just a word. A word that means old!. Yes we are older and wiser...but you are nameless, faceless, ageless? And so are you folks. 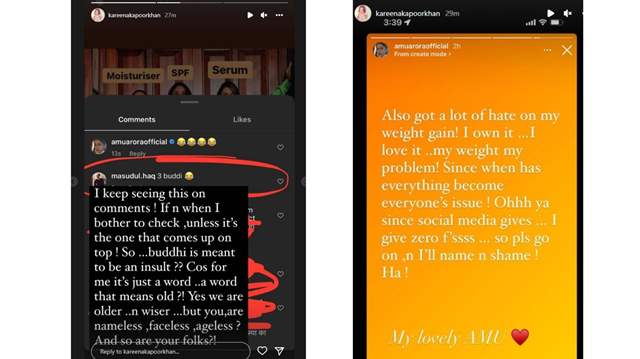 She also reshared the story of her bestfriend Amrit Arora who was fat shamed by the netizens for her latest look. The story read, "Also got a lot of hate on my weight gain! i own it, i love it, my weight my problem. Since when has everything become everyone's issue! Ohh ya since social media gives... I give zero F'sss...so pls go on, n name and shame. Ha!

Sharing this story the 3 Idiots actress wrote, My Love AMU.

Meanwhile, Kareena Kapoor will next be seen in the film Laal Singh Chaddha alongside Aamir Khan. The film is a remake of the Hollywood film Forrest Gump.

+ 3
2 months ago She called Bipasha kali billi. And Mrs kareena Kapoor khan, my name is Ria and I don't need a khan or a Kapoor sir name to prove my worth 😉

viloch12 2 months ago She once called Aishwarya from different generation & now have nerve to call out the trollers. Biggest hypocrites & arrogant aunty of Bullywood.

2 months ago Pot calling the kettle black. She is one of the biggest hypocrites in Bollywood.

+ 12
2 months ago Kareena was a bully herself, so it is strange to hear this from her mouth