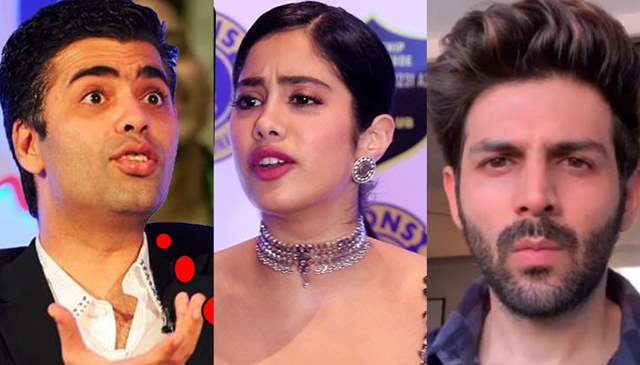 Kartik Aaryan has been replaced in one of the most anticipated projects of Karan Johar's Dharma Productions.

As per reports, the young star was roped in as the main lead for the second installment of the hit franchise but due to some unavoidable circumstances the production house was forced to remove the actor.

When contacted a source close to Dharma Productions and producer Karan Johar, we got to know the real reason and the incidents that forced KJo to ask Kartik to leave the film.

The close source confirmed and revealed, "Yes, it's true. Kartik Aaryan has  been replaced in Dostana 2. The reason for replacing him has been creative differences. After one and a half years and after shooting for more than 20 days Kartik started pointing out creative differences in the film and started throwing tantrums about it. His management agency (KWAN) too started keeping the team of Production house hanging. Repeatedly, they were delaying in allotting the dates of Kartik for shooting.

This has never happened in the history of Dharma Productions that an actor has cited the reason of creative differences. But, Kartik's unprofessional behavior and repeated issues with dates, and what looks like his indirect attempt on nepotism as Jahnvi Kapoor too is a part of the film, Karan was forced to drop him off from the project.

Kartik's behavior has also impacted the new actor on the block, Lakshya, who is making his debut with Dostana 2. Even his debut has now been hampered, as the film's 20 days shooting schedule with Kartik was already done and now again the team will have to start from the scratch.

Now, Kartik has been banned completely from all Dharma ventures and Karan has vowed to never work with him ever again."

We have been repeatedly trying to connect with Kartik's team but they remained unavailable till the article went for publishing.

29 days ago Forced to replace 🤢 What the bull crap ? KJo does not work with outsiders 🤢 Period Works with star kids only Talented or not 😤

29 days ago Dharma productions is all about nepotism

29 days ago Dharma heros 3-4 movies se zyada chalte nai hai and dharma production itself is mediocre so accha kiyanow he can work with better producer and directors.

29 days ago Wow Dharma really hates outside actors. don't they?