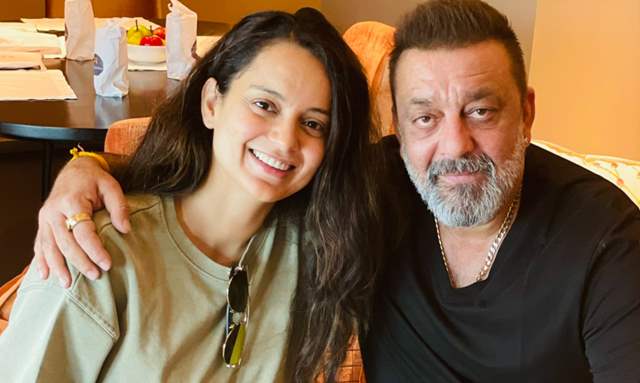 Actress Kangana Ranaut is currently shooting for her next in Hyderabad and she has a special surprise for her fans. The Queen actress dropped a special treat for her fans through social media. The actress 33-year-old actress caught up with Sanjay Dutt who was staying in the same hotel and even shared a picture with her.

Taking to her social media handle, the actress shared the picture as she wrote: “When I got to know we were staying in the same hotel in Hyderabad, I went to see Sanju sir this morning to check on his health and was pleasantly surprised to see him look even more handsome and healthy. We pray for your long life and good health”

For the unversed, Kangana and Sanjay have collaborated on several occasions and they have been worked in films including - ‘Ungli’, ‘Double Dhamaal’, ‘Rascals’, ‘Knock Out’, ‘No Problem’ and others.

Sanjay Dutt was recently diagnosed with cancer and he emerged victorious in his battle. While the actor has been announced cancer-free, he has started working on his upcoming projects and he recently released the trailer of his film - Torbaaz.

Meanwhile, on the work front, Kangana has films like ‘Thalaivi’, ‘Dhaakad’ and ‘Tejas’ in her kitty. Sanjay Dutt, on the other hand, has films like ‘KGF: Chapter 2’ in his pipeline.