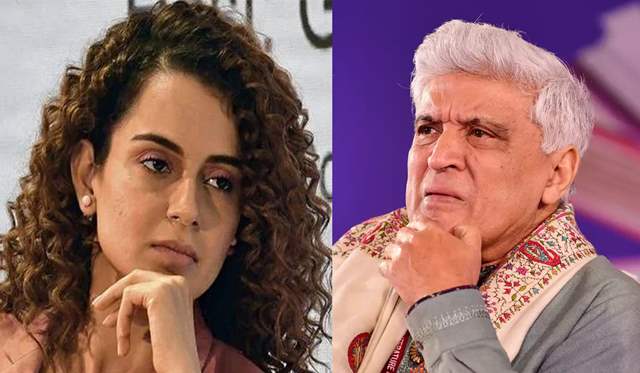 In the defamation case of Bollywood lyricist Javed Akhtar, actress Kangana Ranaut was to appear in the magistrate court in Andheri, and she did. However, a latest update has come in post her appearance where her lawyer said she too had filed a case against the veteran lyricist.

A report in ETimes read that in her complaint, Ranaut has accused him of extortion and criminal intimidation, among other charges. She has alleged that in a public dispute with her co-star Hrithik Roshan, Akhtar called her sister and her to his house at Juhu and threatened her and forced her to tender a written apology.

Meanwhile, Ranaut’s lawyer Rizwan Siddiquee said she has also moved a plea before the chief metropolitan magistrate seeking a transfer of the defamation case from the in-charge court on the grounds that she has “lost faith” in it. He said they were “not comfortable” before the court and felt it was “biased against her.” The transfer plea will come up for hearing on October 1.

Ranaut’s plea against Akhtar said, “The said accused (Akhtar) even had the audacity to then force me to tender a written apology to my said co-star (Roshan), thus, forcefully seeking to create a document (valuable security) in favour of my co-star.”

Ranaut’s plea also said she was threatened with dire consequences and told by indulging in a public fight with her “most powerful co-star and his family” she will be making her life miserable because she would go to jail and later take her life. She also alleged her moral character was attacked through certain statements. “The accused through his acts of crimes has thus wilfully caused me immense mental torture and trauma which still continues to have a disturbing effect on my mind,” the plea said.

She said instead of being apologetic, the defamation case was filed against her. “I state that my family has now permitted me to proceed with this complaint against the accused,” Ranaut’s plea said.

Siddiquee said without providing any sufficient cause and without there being an order on record, the court was threatening issuing “an arrest warrant”.

Akhtar’s lawyer opposed his submission and stated the transfer petition filed before the SC is already disposed of. He contended that Ranaut was intending to evade legal proceedings.

+ 6
1 months ago Yes, it was Javed’s Jinn. Brainless, attention-seeking creature!