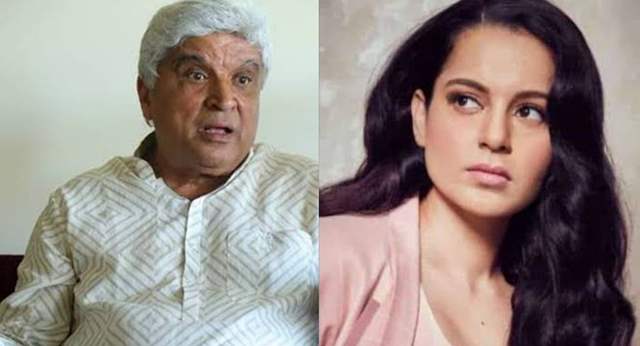 The matter was heard in the Andheri court on Monday (September 20), in which Kangana Ranaut was to appear.

After appearing in court, the actress has given her response in this matter. Kangana Ranaut has alleged that Javed Akhtar has filed a defamation case against her under pressure from Shiv Sena.

At the same time, she keeps on speaking frankly on many issues.

After hearing the defamation case, Kangana Ranaut has given her response through her official Koo app account.

She has shared her pictures on the Koo app and Instagram aswell. In these pictures, Kangana Ranaut is seen wearing a saree and sunglasses. Sharing these pictures, the actress wrote in the post,

'Remember those who can't make you can't break you either... Also when in these eye of the storm..look in the eye and pose ... Today was the hearing of Javed Akhtar case which he filed under the pressure of Shiv Sena. Lone warrior to face the hyena army in this style.'

Let us tell you that Kangana Ranaut has been in trouble for a long time regarding the defamation case filed by Javed Akhtar.

In his complaint, Akhtar claimed that Ranaut dragged his name during an interview while referring to a coterie' existing in Bollywood, following the alleged suicide committed by actor Sushant Singh Rajput in June last year.

Javed Akhtar had filed the complaint in the court in November last year, claiming Ranaut had made defamatory statements against him in a television interview, which allegedly damaged his reputation.

The actress appeared in the Andheri court on Monday, 20 September, for the hearing of the matter.

Last week, the court had directed her to appear on the next date, failing which it would issue an arrest warrant.

27 days ago Is this woman for real? SS party forced him? She's clearly out of her mind. She dragged his name in SSR case which has nothing to do with him at all. To take out her own anger and frustrations. She has a sick mindset. She is a liar, have COVID-19 symptoms just few days ago then she is surprising well now. Okay. Then she even walks around without mask with her Y security which I still don't understand why she has it in the first place. I was quarantined for two weeks after being vaccinated as I came in a close contact with a COVID-19 positive. Then she makes stupid statements. How do the citizens of India stand her?

+ 3
27 days ago She thrives off of attention & it shows. She gets those sadistic pleasure knowing she's irritating others. People like her up for no good.

+ 6
27 days ago This waste of space needs to disappear from the face of the earth. She has ABSOLUTELY no real issues to discuss or even highlight for the sake of humanity's benefit. She's just an empty vessel creating unwarted ruckus! Don't necessarily care about Javed Akhtar, but this buffoon needs to be completely boycotted and alienated from the rest of the society. Let her go dwell somewhere in the mountains smoking pot and brooding over her endless miseries. Blah!

27 days ago Doesn't she have any PR who'd stop her from doing these embarrassing stuff???