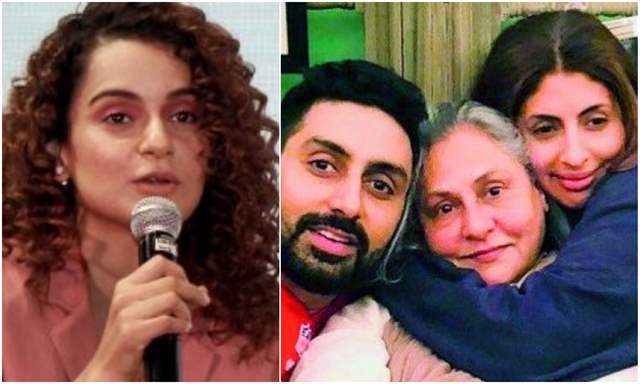 Kangana Ranaut has reacted to Jaya Bachchan's speech at the Monsoon Session in Parliament with a hard hitting question.

Actress and Samajwadi Party MP Jaya Bachchan spoke in support of the entertainment industry as she stated that the   image of the entire industry is being tarnished. She had also hit back at BJP MP Ravi Kishan's remarks about the alleged 'drug addiction' in the Bollywood industry and actress Kangana Ranaut's 'gutter' comment.

And now in her response, Kangana has questioned Jaya Bachchan as she asked her what would she do if the tables turned and her children were subjected to harassment and bullying?

During the second day of the Monsoon Session in Parliament, Jaya Bachchan had given a Zero Hour notice in Rajya Sabha and lashed out at Ravi Kishan's comments. She had said, "Just because there are some people, you can’t tarnish the image of the entire industry. I am ashamed that yesterday one of our members in Lok Sabha, who is from the film industry, spoke against it. It is a shame."

For the unaware, BJP MP Ravi Kishan had commented about the alleged 'drug addiction' in the Bollywood industry.

basherz 11 days ago who was beaten, drugged & molested ? SSR certainly wasn't in the industry as a teenager. A simple question to ms. KR - if she was still having an affair with "Hrithik" (as per her), would she be commenting about this nonsense with no heads or tails for her statements ?