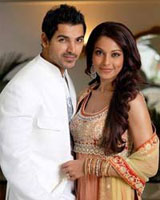 Featured Video
B-town. But apart from being popular these actors are thorough professional too.


Bipasha's recent item song in the movie 'Aa Dekhen Zara' is really appreciable, but what is more appreciating is her level of professionalism. While shooting for the item number the actress injured her knee inspite of the injury the actress continued to shoot the song sequence. Also till the release she will seen busy promoting her movie all over.


Similarly, recently when John was shooting for 'Hook Ya Crook' he injured his leg badly but even after that he continued to shoot. And after that he even made his presence in two award functions. Now that's called a thorough professional.


So, guys don't you think this is one more reason to love them?