Jhanvi, the lead protagonist of the show 'Bandhan Saath Janamon Ka' on COLORS is dead. 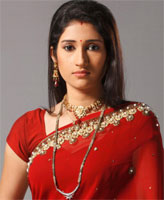 Featured Video
In a sudden twist to the tale, Jhanvi dies in a stampede while she is at a temple with her husband Parth to celebrate 'Basant Panchami'.

When things had just begun to look good, an unexpected event changes their lives forever. "The scene follows as I and Parth go to a temple at the top of a hill and suddenly the rumors of a bomb kept in the temple is spread", says Gungun aka Jhanvi.

As said she dies in the stampede that follows. "People start running here and there and in that we both get separated. After all gets normal, my husband searches for me, but cannot trace me", adds the actress.

"After two days police finds a body which looks similar to mine, and they declare Jhanvi as dead," she states.

As per our khabroo, "The TRP's of the show has been dipping, thus the creative decided to bring this twist in the tale. After few days Jhanvi will return in Parth's life."

Born and brought up in a middle class family, Jhanvi aspired to make it big someday. However her dreams were short lived as she was unexpectedly married to Parth in a conspiracy set by his so-called parents in order to seize dowry from Jhanvi's parents.

Soon she discovers the background of her husband Parth, who is uneducated and actually a servant to the Guptas. She is constantly harassed by the Guptas due to her parents' failure to meet their demands.

She accepts her fate quietly and starts living a simple life along with Parth but is unable to forgive him. As time passes, she comes to terms with reality and falls in love with Parth. As their life seemed to be getting on track, another tragedy strikes themwith Jhanvi losing her life.
Parth Gupta is shattered by this sudden twist of fate and the entire family mourns the untimely death of their bahu.

Tune into 'Bandhan Saat Janmon Ka' Thursday at 7.30 pm on COLORS and join the grieving family of Jhanvi in her remembrance.

sachii 12 years ago thank u sooo mch god... dat wat i thought turned out b false...
yar whole of my family was so depressed... cud''nt believe it dat janvi is no more..
janvi/gunjan is toooooo sweet grl... god bless her :)

12 years ago EXACTLYY MAN I WAS CONFUSED TOO .... I THOUGHT THAT SOMETHING HAPPENED WITH THE ACTOR ...... GOSHH ...WHAT AN INTENSE PROMO

+ 2
12 years ago i got 2 catch d prmo. man d promo is horrible sayin she is dead.. i was puzzle thking d real actor. hw stupid of me. anyways I hope dis twist wrk out. mine parth will b all alone nw

12vinod 12 years ago guys she dead really not only in serial, she is no more

+ 7
12 years ago well well..I nearly mistook the promos that the main lead is dead..

12 years ago My god..i dont watch this show, but on watching the ad on tv, i thought the actress is dead in reality.. To what extend the tv channels go for TRPs