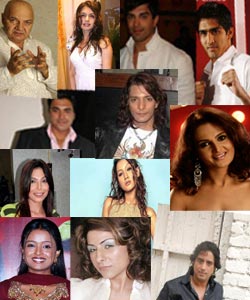 Featured Video
And here is Telly Buzz giving its readers the finalized names of this season’s participants.

The hosts for the season have not yet been finalized, and the celebrities who have been approached as of now are Shweta Tiwari, Mona Singh, Sushma Reddy, Shiv Pandit and Rohit Roy. “Nothing has been decided on the hosts till now. It will take few days to zero in on them”, explains our source.

Telly Buzz had earlier reported that Saroj Khan, Sanjay Leela Bhansali and Juhi Chawla will be the judges for this season. “However, while Juhi and Sanjay are finalized, there seems to be some mystery when it comes to the third judge on the show. Saroj Khan was almost finalized, but now we have approached Vaibhavi Merchant too. The third judge will either be Vaibhavi or Saroj. We need to wait and see what happens”, concludes our source.

The participants have gathered for their rehearsals today, and from here starts their struggle to emerge victorious in this season of Jhalak Dikhhla Jaa.

This season of Jhalak will be produced by BBC, and will be launched after the conclusion of Indian Idol, in the last week of February.

So, have you now decided who you are rooting for??

+ 2
13 years ago omg...karan and parull
ranvir should be in there with her tooo...
waiting for the show..

13 years ago if it wasn''t for karan n vejendra I won''t be interested at all. o n juhi will be an interesting judge. i''ve never seen her criticize anyone.

13 years ago Wow Karan in. He is good and will surely do wonders. Will be cool to see him as a participant after he being a host for ZND

13 years ago OMG OMG OMG OMG OMG OMG OMG OMG OMG OMG
I cant believe it MY KSG is actually gonna be in JDJ arghhhhhhh OMG its sooo unfair i dont have sony so i cant watch him dance :( im jsut gonna have to cope on youtube to see him omg he wud be lukiin sexy in anyfiin he wears and omg they way he will dance will kill all of us mainly me :D