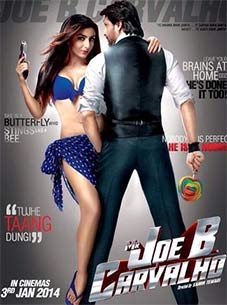 From a blond woman to a Maharashtrian lady - Javed Jaffrey, known for his brilliant comic timing, will sport seven different quirky get ups in "Mr. Joe B Carvalho" to woo the audience.

"His characters are a treat to watch," said Samir Tewari, director of the film, which stars Arshad Warsi and Soha Ali Khan as the lead pair.

"I remember when we were shooting for his sequences he would take almost four-five hours for his make-up and once he was ready he would be in character throughout the day, till the shoot came to an end," he said in a statement.

Javed plays "Carlos" in the film and he had to sit for about four-five hours for make-up sessions. Some of his other looks in the film are that of an Afro man and a sadhu baba.

"When we shot the Maharashtrian killer maid look, Javed spoke to everyone on the set in Marathi in a scary deep baritone, even when he was off camera, which was quite hilarious. It was surely a pleasure to direct Javed bhai," said Tewari.

Produced by Bhola Ram Malviya and Shital Malviya, the film is set to release Jan 3, next year.

'Naagin 5' To Welcome Two New Entries in The Form of Karan ...
37 minutes ago