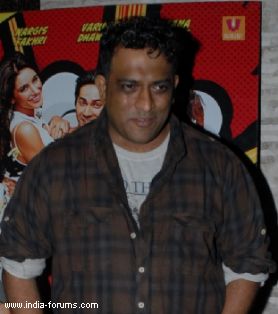 Anurag Basu, whose last film, the highly acclaimed and successful "Barfi!" came two years ago, won't have any release this year. His "Jagga Jasoos" is being shot at a slackened pace, while his other projects are on hold till this one project finishes.

Said Basu: "'Jagga Jasoos' was planned as a quickie. But Ranbir Kapoor (who is the film's co-producer) has been shooting simultaneously for Anurag Kashyap's 'Bombay Velvet'.

"We've to shoot 'Jagga Jasoos' during the gaps in the shooting of 'Bombay Velvet'. We completed one schedule. Now we'll go into a lengthy schedule from August. By the end of the year the shooting would be complete."

It's interesting that Basu admits to shooting "Jagga Jasoos" in-between the schedules for "Bombay Velvet". "Barfi!" had been delayed because it was shot in the spaces provided during the shooting of Imtiaz Ali's "Rockstar".

Defending the delays, he said: "Whether it's Imtiaz during Barfi or Anurag Kashyap during Jagga Jasoos, they are both friends. And besides it's all Ranbir's projects, so there is no question of prioritizing wrongly."

Next, Anurag Basu goes into his Kishore Kumar bio-pic.

Basu says he is definitely committed to making that film.

"Ranbir and I are certainly doing it. We'd have gone into it right after Barfi. But then Ranbir got committed to 'Bombay Velvet'. So I decided to make 'Jagga Jasoos' first. 'Kishore' can't be made in breaks and spurts. It has to be done in one long stretch."

As for the biopic on mathematician Anand Kumar, Kashyap throws the ball in Kumar's court.

"He is keen, so am I. Anand is in touch with my wife. But where are the papers? He hasn't signed any contract or legal papers. Unless he gives us official and legal consent to make a film on his life, we aren't going ahead with it. Making biopics in India without all the necessary papers is very risky," he added.