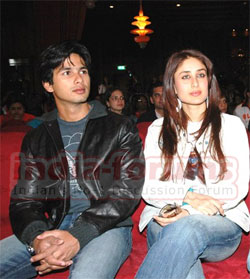 The main reason why 'Jab We Met' must be seen is Kareena, and the sparks that fly between her and Shahid.

Having gotten beyond her effervescent image in this ode to love, Kareena is brilliant. In a tailor-made role, she plays a boisterous Sikh girl on her way to tell her parents about her boyfriend, but meets up with a brooding, suicidal, jilted entrepreneur.

The sparks fly instantaneously ... and infinitely between them.

A chance encounter between two people on a train is not the most novel of cinematic ideas, but the sparks that fly between Kareena and Shahid seem so genuine that you just sit back and watch the characters go through a series of brilliantly conceived and energised incidents that bring them together.

Surprisingly, there are no surprise elements in 'Jab We Met'. Director Imtiaz Ali, displaying a deft and lucid command over his material and actors, lets the boy-meets-girl story take its own course without pushing for effect.

The vignettes on the trains and off them look so lived-in you could reach your hand and touch Aditya (Shahid) and Geet's (Kareena) glowing relationship in the small towns of Punjab and other parts of north India. 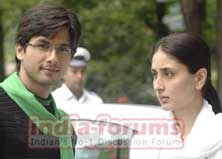 and not a single shot strives for effect.

In the first-half Kareena talks and Shahid listens. His is the tougher, less ostentatious performance characterised by pain and anguish as opposed to the Kareena's impetuous exuberance.

Kareena's insouciant warmth just bathes the screen in voluble splendour. She proves once again that when she puts her heart to it, she's quite simply the best. In the second-half, she beautifully depicts the ruins of a broken heart.

The director invests a whole lot of quiet moments between the couple. These are handled with a mellow maturity that defies the overall lightness of the romantic-comedy genre.

The songs composed by Pritam are a pleasure to hear. In 'Yeh ishq haye', Kareena's unconditional surrender to joie de vivre reminds one of Waheeda Rehman in the song 'Aaj phir jeene ki tamanna hai' in 'Guide'.

Kareena has a dozen or so expressions flitting across her restless face at any given time. And the director harnesses these to take the romance to a new high.

Shahid is right up there, furnishing restraint to his role of a man just waiting to come out of his shell. 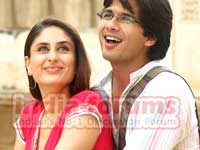 There are many reasons apart from Kareena and Shahid why 'Jab We Met' is a special film. The narrative moves with serene swiftness through several cities and towns, giving the lead couple a chance to get to know each other.

The never-ending festivities in the heroine's bustling Sikh household do get oppressive beyond a point, and the imminent 'yes' to the romantic mess is unnecessarily delayed.

But by the time Shahid and Kareena get into a clasp for a farewell kiss we are just left cheering the couple.

Heart-warming in its sincerity and utterly wedded to the feeling of romantic integrity, 'Jab We Met' is the kind of cinematic experience that is hard to come by in this day and age of smoky cynicism and borrowed rage. 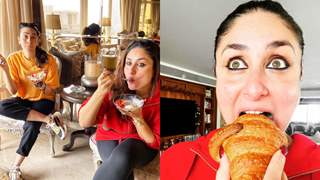