View Profile
There are rumors floating around that Ram Kapoor will play the role of the blind Dhrithrashtra in Ekta Kapoor’s Mahabharat. However, when we spoke to the talented actor about the same, he denied being part of the mega 9X epic. 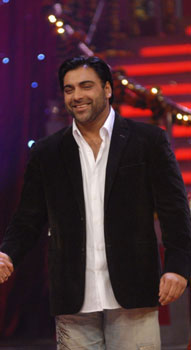 Featured Video
When asked to comment on the rise of Kasamh Se TRPs after Gurdeep Kohli’s dramatic entry as Bani, Ram replied, “The ratings were bound to rise given the twist in the tale. As for the public accepting Gurdeep, we will have to wait a while before answering that question”.The better half of Gautami seems quite happy doing only one show. “I like to concentrate on a single project at a time. I don't want to comment on others who do multiple shows. My idol is Aamir Khan, so I think that should answer your question. Moreover, I would have taken up more shows if I needed the money, but luckily I make good moolah just by doing Kasamh Se”, quips Ram.


He further denied the possibility of him re-entering Kyunki Saas Bhi Kabhi Bahu Thi as Jas Thakral. “That character failed, as he was too sophisticated and quirky for the Indian public to digest”, opines the actor. On his long television innings Ram remarked, “It’s been 10 years now. I have learnt a lot. Kasamh Se would have to be my best show till date”.He seemed a bit irritated on the constant media speculation. “Sometimes you guys know more about me than even I do”, says Ram with a grin. According to Ram, being popular has its flip side too. “You loose your freedom to do your own thing. You are constantly under public scrutiny”, states the actor.

As he signed off, we could not help but ask what he was doing about his excess weight. Ram fired back, “I have invested in a treadmill and am following a strict diet plan”.

14 years ago i stopped watching ks a long time ago but i always loved ram for his performance in the earlier episodes from whatever i'd seen... jeez guys leave him alone about the weight! i feel so bad whenever i read or see interviews where people ask the poor guy about it he's an amazing actor like focus on that n not other things... lol srry if i sound a little offensive but its true

14 years ago Great article. Thanks

I really hate the character Meera and don't like the new Bani at all, so I have stopped watching Kasam Se since the leap.

Hope Ram does a new show soon. I miss watching him and hope he plays his age,

14 years ago i think he looks fine.....maybe he won't luk gud without his jelly stomach....

14 years ago I'm sure he knows he has put on some extra pounds. leave him alone and he will loose when he wants too.

+ 2
14 years ago yeah, it sucks that Prachi isn't Bani anymore,but the show does seem more intresting.

14 years ago didnt like the weight Q. sounds irritating