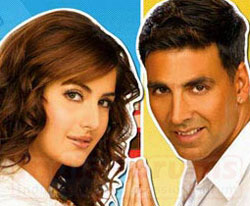 It looks like hot babe Katrina Kaif has lost her cool on the unwanted rumours created by some part of the media and has decided to rebuff. Recently it was reported that Akshay Kumar, while seated at the IIFA awards with his wife Twinkle, ignored Katrina’s calls. It was also said that Twinkle and Katrina share cold vibes and looked through each other at Vipul Shah's party thrown for his wife Shefali last month.

Katrina, listening to all, fumes, “People need to stop imagining so much. This is pure imagination on someone's part. Akshay Kumar came in for the show in the night and left right after as he had a flight to catch. I had dinner with Twinkle and some of her friends after that and even my mom was with me. So what's with these stories?”

It’s thus proved that media was throwing imaginative bricks at the otherwise cool Kat. But it’s said that everything, said or drawn, has to have some base. Even imagination must have some stage to stand on. What should we think then? And if, throwing an if, the whole picture is baselessly imaginative then what’s the need of becoming so hot? Especially when people know Kat is really hot. Maybe the temperature is required to make some Akki dish! Who can say if something is cooking at the backdoor? Hun, you naughty hot Kat?
Featured Video