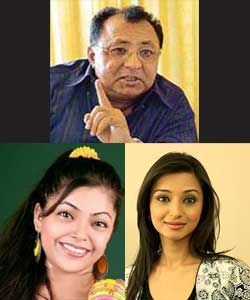 Tellybuzz had earlier reported about Creative Eye coming up with a new show on Imagine TV with a Punjabi backdrop that tells the story of five sisters. We have also mentioned that Ankita Sharma (Fame Baat Hamari Pakki Hai) has been finalized to essay the lead role in the show.

The latest we hear is about few more names roped in to play prominent roles in the show.

A source says,"The Production House has already shot the promo which will be on air by next week. Along with Ankita Sharma, essaying Preeto, Divya Bhatnagar aka Gulabo of Star Plus' Ye Rishta Kya Kehlata Hai and Ira Soni (fame Geet Hui Sabse Parayi) have been finalised to play the sisters. The other two will be new faces. Sushil Parashar (fame Maryada) has also been finalized to play their father in the show. The hunt for the mother is still on."

A source adds further, "Divya Bhatnagar will essay Meeta, the eldest sister among the five, Ira Soni will essay Ishmit, the second sister and Ankita Sharma will play Preeto, a very ambitious girl who owes her life to her sisters and family.  Debolina and Mahima will essay Bani and Sonu respectively as the younger sisters and are new faces."

We contacted Sushil Parashar and he confirmed, "Yes, I will be essaying the father of five daughters. He is an educated but financially ill and retired person."

Divya Bhatnagar too confirmed the buzz, "I will be playing the eldest sister among all who always dreams of getting married. She is not so intelligent and therefore wants to get married."

We hear that on 7th of June, the entire cast will leave for Amritsar for their first outdoor shoot.

Divya u r so cute sweet and lovely as Preetho in GHSP...

GC YOU ROCK! GLAD YOU'RE STILL AT THE TOP!

+ 2
9 years ago Lots of actors are in demand after their stints in GHSP. Good for Ira! :D

9 years ago Really happy to see ankita back on tv soon!!

ALL THE BEST ANKITA...
LOVED 2 WATCH U IN BHPH

9 years ago Ankita is Back..Waiting for the Promo..Its Very Nice to See Her Back very soon..

ALL THE BEST ANKITA...
LOVED 2 WATCH U IN BHPH

+ 4
9 years ago 5 sisters? But this time, w/ all of them unmarried? But can they sustain 5 leads, or are the younger sisters just support roles, and not all meant to marry?