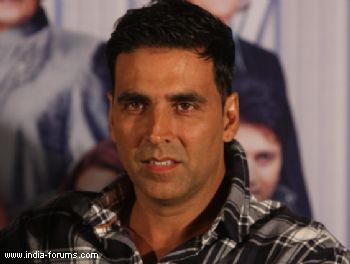 Akshay Kumar took a well-thought break from kicking and boxing in films, but now is back to the action genre with "Rowdy Rathore". The 'Khiladi' of Bollywood says he is absolutely geared for the new innings.

"It's been some two to three years that I have stayed away from action movies. It's because when my son (Aarav) was two years old, I was scared that what if something happened to me...that's why I was off action," Akshay said here Monday night.

The 44-year-old established himself as the 'khiladi' of Bollywood thanks to a slew of daredevil stunts in action films like "Khiladi", "Khiladiyon Ka Khiladi", "Waqt Hamara Hai" and "Mohra".

But with "Rowdy Rathore", directed by Prabhu Deva, he promises to be back in the 'khiladi' avatar.

"Every father would understand the emotion behind the decision of withdrawing from action because nothing else matters for parents than the children's happiness and well-being.

"But now my son is nine years old. God forbid if something happens to me, he can do something... So I am back to action, and absolutely ready for another innings," said Akshay, who adorns the cover of the latest issue of Stardust magazine.