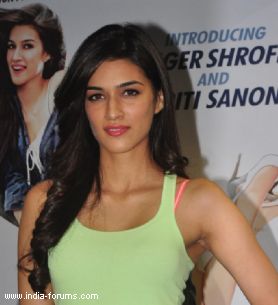 Actress Kriti Sanon, who is making her big screen debut with "Heropanti", has locked lips with newcomer Tiger Shroff for the film. But she says she was hesitant about it as she comes from a conservative family.

"When Sabbir Khan (the film's director) told me about the lip-lock scene, I was hesitant about it. I told him - 'Can't we just skip this? Is it that important?' But he said it was an important scene and it goes with the flow and it won't look out of place," Kriti told IANS.

Eventually, she agreed to the scene, and says "it all went off well".

"I come from a conservative family, but my parents took it in a positive way and they supported me with each and every decision of mine," she added.

She is flexible as an actress.

"I don't like to limit myself as an actress. I go with the flow of the film. I feel if it's the demand of the script, then you should do it," she said.