Kuldeep Singh Chauhan, the 28 years old aspiring singer was the first male contestant to get evicted in the Galas of Indian Idol 4, this weekend. He has been teaching music since long in Lucknow and dreams of becoming a playback singer. 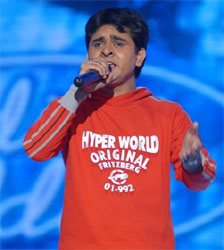 Featured Video
“I want to become a singer and I know I will,” says Kuldeep.

So what went wrong according to you on the eviction day? “I think the body language and the looks that a complete performer needs, has been missing in me. Besides, the judges said that the throw in my voice is not proper. So I guess these were the reasons for my ouster,” he adds.

Did you expect to be in bottom and get eliminated too? “Not at all… I mean after coming in the top 10, it was difficult for me to gulp down this decision. I was told that I lost the opportunity by just few votes. I’m feeling bad, but don’t regret nor I am angry on any one. The janta and judges have supported me a lot and I’m thankful to them,” he quips.

Talking about his journey Kuldeep explains, “It was good, as I got few praises and criticisms too, so going out with mixed memories of the show. It would have been nice if I had stayed on till the end, but unfortunately that did not happen”.

“For me Indian Idol was a good platform to get the recognition. I have not lost any thing, but will continue to grow in this field. I will come back and try my luck again. For now I have a contract with Sony which will give me the chance to perform live on stage, and I have few shows lined up,” concludes the singer.

Let’s wait and watch as to who will be the next to bid adieu to the stage of Indian Idol.