After the runaway success of ‘Golmaal’ Rohit Shetty is now not only busy shooting for its squeal ‘Golmaal Returns’, but also waiting to hit the screen in a big way with his latest venture ‘Sunday’. The film is a blend of comedy and thriller and presented in an altogether new way. Recently, we caught up with Rohit, who is all excited about ‘Sunday’ and talked at length on various aspects. Here are the excerpts.

Q: First of all, I would like to ask you why the film has been titled ‘Sunday’.
A: In fact, everyone is asking me the same question. It has been titled ‘Sunday’ because the story of the film is based on a Sunday. When we sat down to keep the title of the film, we were at a loss. We neither wanted to project it as a dark film, nor as a slapstick comedy. At the same time, we did not want people to assume the film to be a hardcore action film. Thus, we settled on the name ‘Sunday’.

Q: What was your experience doing ‘Sunday’? Has the film lived up to your expectations?
A: Believe me; the film has turned out to be far better than my expectations. I have had so many good actors in the film that my experience has been a marvelous one. All the actors Ajay, Ayesha, Arshad and Irfaan have performed extremely well in this film. Everyone has put their lives into their respective roles.

Q: These days too many comedy films are being made in Bollywood. What is your take on your comedy film?
A: All that I can say about my film is that this is not a comedy film like the others, but t 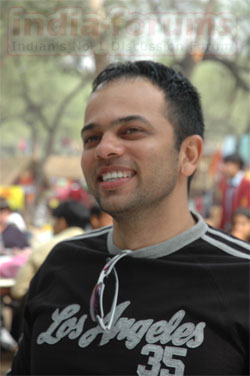 Featured Video
here is a blend of thrills and a bit of action too. While watching my films the audience will not just be laughing, but also thinking about what will happen next. Thus, my films present two different aspects and cannot be called slapstick comedies, but terrific humors.

Q: What was the basis of selecting the artistes in ‘Sunday’?
A: In this film Ajay is portraying a corrupt police office who does not talk about the system, but about bribery. When I first narrated the role to Ajay, he immediately agreed to work in the film. Similarly, Arshad, who has a very good understanding of comedy and he has proved this again in ‘Sunday’, is doing a role of an intelligent cab driver. Irfaan is a surprise package in this film and he is doing the role of a struggling actor who is idiotic, but cute too. On the other hand, Ayesha has done a wonderful role in this film; just keep an eye on her performance.

Q: What has been the most memorable incident during the shooting of the film?
A: I must admit that shooting in the hot Delhi climate that often reached 47-48 degree Celsius was really a daunting task. I remember what Ajay had told me when I asked the unit to shoot in such intense heat. ‘Yaar, yahan to anda phor dene se omelet ban jayega' (If you break an egg in this temperature it will soon be an omelet). In fact, to prove his point, Ajay got an egg and broke it on the street. We all kept waiting to see if it turned into an omelet, but nothing such happened. In fact, the audience will see many such scenes once the film is completed.

Q: What is the reason behind including an item song with Esha Deol and Tushaar Kapoor in the film?
A: Look, I am very fond of the Hindi movies of the 70s which included romance, action, thrills and a villain in the end. Amidst such tensions, Helen’s dance number would be a relief for the audience. Keeping this in view, I have included two separate item songs with Esha and Tushaar in this film.

Q: What are your expectations from this film?
A: Well, it is very natural that I would want my film to be a super duper hit. Is there any filmmaker anywhere who would like his film to be a flop? I am hoping that this film too will be a super hit as I am not only its director, but the film also has all the ingredients of a good film and everything thats required to make a movie ring at the box office.

Q: This film is a blend of comedy and thrills. Will you ever make a hardcore action movie?
A: I have not thought anything in this regard. Presently, I am busy making ‘Golmaal Returns’ and I am keen to make an identity as a filmmaker who always makes good films. I would want the people to say, look whether he makes a comedy, thriller or action film, he makes them well.

Q: Ajay Devgan’s first comedy film was your production ‘Golmaal’. Do you take the credit for this?
A: Not at all (laughs). Actually, nothing like this happens. If my next film does not prove to be a hit at the box office, people will throw their slippers at me. In fact, while making ‘Golmaal’ we never thought that the film would turn out to be such a hit. It is not like this that Ajay Devgan has begun acting in comedies because of me. He is a good actor and will do anything better than most.

Q: Personally, what kind of filmmaking do you prefer?
A: I only make films that touch my heart.