'Tashan' was a flop, but it is still actor Saif Ali Khan's favourite film because it brought girlfriend Kareena Kapoor into his life. 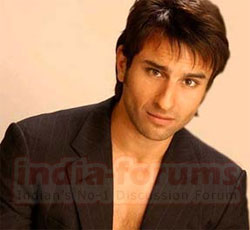 Featured Video
of it. I met Kareena during 'Tashan'. That's enough for me,' Saif told IANS in an interview. Starring Saif, Kareena, Akshay Kumar and Anil Kapoor, the film fell flat at the box office.

The actor also admits that he wants to spend as much time with his girlfriend as possible. He said: 'Look, she's shooting in Australia and I had two months off. So obviously I'd go to visit her. Or if she's doing an event in Andheri and I can join her, I will.'

Wagging tongues don't bother Saif who is gearing up for his next release 'Thoda Pyaar Thoda Magic'.

'I know people will talk about it. I don't care. Every relationship goes through a period of consolidation. We've been together for nine months. We both know how much we mean to each other.'

Q: Disheartened by the failure of 'Tashan'?
A: Not at all! I liked the script. The role didn't end up the way I thought it would. It was edited quite a lot. As Aditya Chopra explained to me it was for the betterment of the film. But, yeah, it was a disappointment. I won't pretend about that.

Q: 'Race' was a hit, but it was a terrible film.
A: Who cares what you think about it? It ran, and I was frowning throughout. A superhit, that's nice; I enjoyed the wheel dealer plot.

Q: Were you convinced?
A: Well...it has taken me a long time to get to the position of the main lead. And the man responsible for this in many ways is Aditya who gave me 'Hum Tum' and 'Salaam Namaste'. I've always trusted his judgment.

Q: But Akshay Kumar had all the punchy dialogues.
A: You win some, you lose some. I knew he had a stronger part. Our roles turned out different from what it was expected to. I really believed in the idea, and we all stood by it. Now let's see. It was great fun making the film and something really positive came out of it.

Q: What's that?
A: I met Kareena during 'Tashan'. That's enough for me.

Q: You do want to spend as much time with Kareena as possible?
A: Obviously. Look, she's shooting in Australia and I had two months off. So obviously, I'd go to visit her. Or if she's doing an event in Andheri and I can join her, I will. I know people will talk about it. I don't care. Every relationship goes through a period of consolidation. We've been together for nine months. W 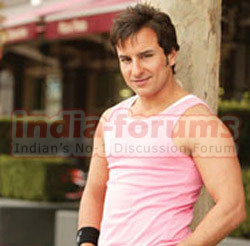 e both know how much we mean to each other.

Q: Why are you frowning so much in public these days?
A: Am I? If you're talking about the promos of 'Thoda Pyaar Thoda Magic', that's a frowning role.

Q: Is it because of the prying eyes?
A: No, one should get comfortable with public attention. I'll make an effort to look happier. I am happy. I've so much to look forward to. I'm doing so well professionally. I've a great personal life. I guess I'm just a frowning guy. I must stop that.

Q: You're leaving to shoot for your first home production?
A: Yes, I leave for London now. It's a love story and I'm proud to be producing it. It's very original, a little too original.

Q: You mean it's bold?
A: Bold and beautiful. We shoot in London, San Francisco and Delhi. My partner Dinesh Vijan chose the locations.

Q: You seem to be inaccessible to a lot of producers who want to sign you.
A: When I started out, producers didn't understand the way I worked, and vice versa. A regular filmy set-up didn't suit me, not because of any snobbery but because I'm not a good improviser. I needed my script and lines so I could work on them.

For so long I was comfortable in my kind of world... you know, 'Dil Chahta Hai', 'Hum Tum'... I was a little wary of the more old school directors. I decided to venture out and try a cinema I thought I wouldn't be comfortable with. I worked with Abbas-Mastan. Today I'm open to work with anyone.

Q: But you are still very picky?
A: Yes. Because no matter how many films you do, you can't have more than three-four releases in a year. So why do any more?

Q: Why did you opt out of Farhan Akhtar's 'Voice From The Sky'?
A: The dates and the finances weren't making sense. It's a great story. It's really sad that it didn't work out.