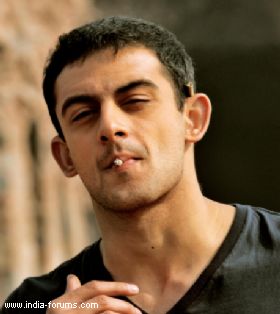 Actor Arunoday Singh, who will be seen in an important role in upcoming Hindi horror-thriller "Pizza", says he enjoyed terrorising his co-star and the film's lead actor Akshay Oberoi throughout the shoot.

"It was so much fun shooting for the film. I loved swinging axe at Akshay, terrorising him and loved the way he would react most of the times. I even pulled spooky pranks on several crew members. It may be a horror film but we had so much fun," Arunoday told IANS.

"This was the first time I worked in a 3D film. Even though I play a psychotic character, the shoot was so liberating that I wished I had a lengthier role," he added.

Arunoday says he didn't mind playing an extended cameo in the film as he didn't want to limit himself with certain roles.

"I knew it was a cameo but I didn't want my ego and greed to restrict me to only bigger or full-length roles. I liked the space I was in the film. Moreover, I'm a big fan of Bejoy Nambiar (producer), so when I got to work with him, I didn't hesitate," he said.

Did he mind repeating such a character?

"I think this character is both scary and negative. There's lot more darkness and complexity in my character in 'Pizza' vis-a-vis any characters I've done before. By playing such roles, I feel I'm doing defining work in terms of growth as an actor," he added.

Directed by debutant Akshay Akkineni, "Pizza" is the eponymous remake of a Tamil blockbuster. Filmmaker Bejoy Nambiar has jointly produced the film with UTV Spotboy.

Asked about working with first-time director Akkineni, he said: "He knew what he was doing and what he's supposed to do. I don't think a newcomer or an experienced director make much of a difference as long as they have a vision and clarity".

"At times you need submit to the circumstance when you feel you're in safe hands. I did that with 'Pizza' as I felt Akshay was extremely clear about his vision," he added.