Sakshi Tanwar played the character of Ganga in Ekta Kapoor’s Kahaani Hamaarey Mahaabhaarat Ki. We spoke to her about the role, the difficulties she faced while shooting for it in Ladakh, on Manish Malhotra’s designs and her two films.

Here are the excerpts: 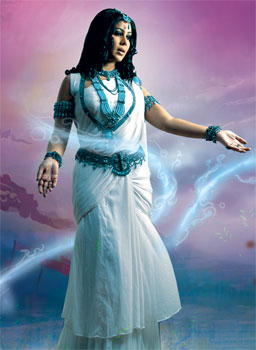 Featured Video
How interesting was it to play Ganga, since it’s a very brief though important role?
Ganga was indeed a very interesting role to play for two reasons. First the length of the role was not much so whatever I had to do was in the three-four scenes that I had. Second, Ganga was all about the aura and mystique of the river Goddess in the human form. So in a way it was a challenge to get the right combination and I hope I have lived up to it. Though short it was an experience I will always cherish.

Did you have a choice to play any other character? If yes, which one and why did you not accept that?
That's not important anymore… what matters now is that I played Ganga.

Were you skeptical before accepting the role considering it's an epic you guys are dealing with and so any goof-ups may not go down well with our viewers?
Long ago, Ekta had offered me a role to do, which I was not sure I wanted to do. It was Parvati and the rest, as they say, is history. This time, I had no apprehensions whatsoever for I knew that if Ekta was convinced that I could play Ganga then she would be right. I went by her conviction. My job as a performer is to do my role with 100% honesty and dedication. The canvas here was huge, the sets, the costumes, the treatment of scenes… the entire feel was so mesmerizing.

Can you describe Manish Malhotra's costumes? Did you two discuss the costumes or did you just go along with his designs?
To me, Manish Malhotra is synonymous with magic. He created magic for me as Janki in Kahaani Ghar Ghar Kii and yet again as Ganga. Manish and Ekta decided on the look
and it was one of the looks that got approved at the first go itself. The costumes added the much-needed ethereal touch to the character.

Reportedly, both Anita Hassandani and Chetan Hansraj had problems with Manish’s clothes. Did you too have any reservations about them?
I just let myself be led by Manish for I have implicit trust that he will do wonders with me.

What are your memories of B R Chopra’s Mahabharat?
I was very young when the earlier Mahabharat had come. It was a magnum opus. I was a big fan of the show and watched it religiously.

Pray why were you shooting at Laddakh for Mahabharat? Are the initial portions shot there? You developed some health problems, right? What happened?
Laddakh has the most amazing beauty in the world. Nature in its most diversified, beauteous and mightiest form…. scenic beauty to die for…. And I am sure you have seen the same on screen. It’s truly God’s land. I just had the usual acclimatization problem on the first day that many people face at Laddakh due to lack of oxygen. In fact I resumed
shooting the very next day, finished my whole schedule in Laddakh and came back and shot here too. I had taken a small break for it had become too hectic. But that was it. I am hale and hearty now.

What next?
I have done a film with Gurbir S Grewal called Coffee House with Ashutosh Rana and a cameo in Balaji Motion Pictures film C-Kompany, directed by by Sachin Yardi. As an actor I am always greedy for good roles. So far I have been lucky to play strong and powerful roles on TV, now I am also looking at doing good cinema.

tanusree 10 years ago Sakshi u r really to good i like,love u sooo much.

14 years ago thts awesome ...the glad the film has some effect

+ 2
14 years ago wow kool she is da bestest actress on TV..she look gorgeous with manish's costume for ganga..