View Profile
Neha Julka has been modeling for a long time now and has more than 70 commercials, like Lays Chips with Saif Ali Khan, Tata Indicom and HDFC, to her credit. She also did a Telegu movie before finally bagging a role in "Kaise Kahein". Neha tells us about her first step in Bollywood, and her future plans. 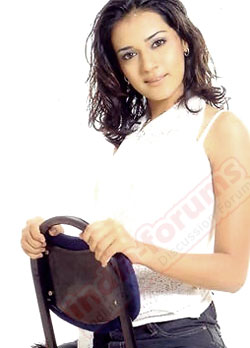 Featured Video
Q: How does it feel to be part of Bollywood?
A: I am excited for sure, and happy, too. In the movie, we were all newcomers and we have put in a lot of hard work. The rest depends on the audience. I can only pray for success.

Q: How did you get this offer?
A: I was not at all interested in getting into Bollywood. One of my (model) coordinators once asked me to meet the producers of this film. I met them, and they asked me to take an audition. I was a little hesitant, but I auditioned anyway. Within half-an-hour it was over. To my surprise, I was informed that I was selected. Smitaji hugged me and said I was on. It actually took me some time to digest the fact that I was really selected for the movie.

Q: Tell us something about the movie and your role in it?
A: I saw the movie only yesterday at the premier. I had not watched the whole movie before. All I can say is that anyone who has been into a relationship or has had an affair would be able to relate to the story. The squabbles and arguments which we all have in relationships is what the film depicts. I play the role of a journalist, who is ambitious and contemporary. It's a realistic character.

Q: How was your experience of working with Rajveer, who is also a newcomer?
A: Oh, I was a bit apprehensive working with him. He is a very hard-working guy; he behaved like a professional during the workshops. Shy that he is, I remember once he refused to hug me for a photo shoot. The director was yelling at him and so were the others. Finally, he agreed to pose with me on the condition that my mom should leave the sets for five minutes. He said he was uncomfortable hugging me in front of my mother. Now when we think of such instances we have good laugh.

Q: Any serious arguments on the sets?
A: I belong to an advertising background, where I used to deal with individuals for a week or a little more. There was hardly any time for arguments then. During film shoots, we artistes need to stay together for months. So, a few differences do crop up but nothing so serious.

Q: What do you have to say about the director of your film, Mohit Hussein?
A: The first day I met him, he said 'You know Neha, I am a very intelligent person'. And I thought why on earth was he boasting about himself with such arrogance. I thought he had some serious attitude problem. But when we started working together, he was so friendly and approachable. He would talk to us to understand our psychology. So, now I agree that he is a very intelligent man. 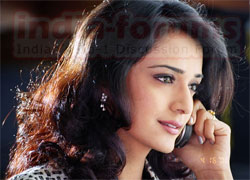 Q: How supportive was Smita Thackrey?
A: I always thought she is a very serious and reserved person. But all my notions were proven wrong. I was surprised when she hugged me after the auditions and confirmed that I was selected. She was very much accessible and asked me to call her up whenever I needed help. I remember when we were going to London for a shoot, she suggested I take my mother along since I was new to the industry. She is a very caring person.

Q: Do you think it was justified to launch "Kaise Kahein" along with the big-budget "Heyy Bayy"?
A: Competition is there everywhere and I think I would be foolish to compare my movie with "Heyy Babyy". The latter has been made with Rs 30 crores, with big stars in it. Our's is a small-budget movie made with Rs 3 crores, with all newcomers in it. I just hope that the audience accepts us. I don't have a rosy picture of becoming a star overnight. All I expect is the acceptance of people. As for the simultaneous release of "Kaise Kahein" and "Heyy Babyy", I think the producer would be the right person to comment on it.

Q: Tell us something about your future projects?
A: I have done a Telugu movie with Chandrashekhar, with Mahesh Manjrekar playing the lead and Rahul Dev in the negative character. The movie ran for a good 75 days. I will be doing another Telugu film in the near future and there's also a Bollywood project in hand. The shooting has not yet started so can't talk about it.