View Profile
Mumbai, March 30 (IANS) Director Karan Johar, who teams up with TV tycoon Ekta Kapoor in her next home production 'C Kkompany', says he cannot refuse any offer from her. 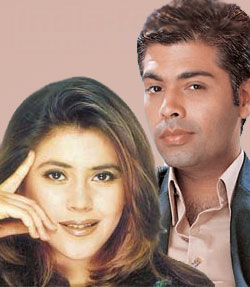 'Ekta is a sweetheart. I can never say no to her. I don't want to divulge any details about the film. Ekta will tell you what I've to do,' Karan told IANS.

Added Ekta: 'C Kkompany' will have Karan and also Mahesh Bhatt making appearances. I'm also there. The awards committees are going to have a tough time next year.'

Ekta ventured into filmmaking with 'Kucch To Hai' and 'Krishna Cottage'. Last year she co-produced the box office hit 'Shootout At Lokhandwala' with Sanjay Gupta.

This won't be Karan's first acting assignment. He started as a child actor in Anand Mahendroo's Doordarshan serial 'Indradhanush', and then played Shah Rukh Khan's nerdy friend in 'Dilwale Dulhania Le Jayenge'. More recently he had a cameo in Sujoy Ghosh's 'Home Delivery' and a voice-on-telephone part in Nikhil Advani's 'Salaam-e-Ishq'.

However, Karan refutes recent reports that he is acting in Madhur Bhandarkar's 'Fashion'.

Karan, whose last film 'Kabhi Alvida Naa Kehna' was panned, has an extremely busy year ahead. Not only is he neck-deep researching for his next directorial venture titled 'Khan', he's also heavily into chatting up celebrities thanks to his reputation of a glorious gabber from STAR TV's 'Koffee With Karan'.