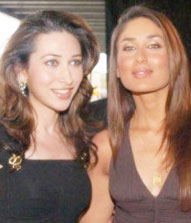 Her younger sister Kareena is known for her yoga obsession, but actress Karisma Kapoor, who is a mother of one and expecting a second, says she prefers the 'gym and a walk' unlike her sibling.

'Kareena is the yoga endorser (of our family). She gets after us to do yoga. But I am not so much into yoga as she is. She has really taken to it and it's a great form of exercise but I prefer the gym,' Karisma told IANS.


'I live a healthy lifestyle. I eat well, but I exercise and do everything in moderation. I go to the gym or for a walk and that's it for me,' she added.


Asked about her comments on Kareena's much-hyped size-zero figure, the 35-year-old asserted: 'I don't think there's any size zero. I genuinely feel that Kareena just lost all her baby fat. She made herself fit and got the cuts that her body has. She just worked at getting that and has been able to bring that out.'