Mumbai, March 20 (IANS) Kareena Kapoor, who's been on a high since the release of 'Jab We Met', finally started shooting a new film 'Main Aur Mrs. Khanna' with Salman Khan. She says the idea of working with her 'sister's co-star' makes her nervous.

'Although we've done Priyadarshan's 'Kyon Ki...' before, I always get nervous working with Salma 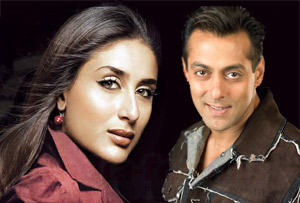 Featured Video
n. He was my sister's hero long before we were paired together. And now to be doing a film with him,' Kareena told IANS.

Kareena started shooting Tuesday at Film City at the outskirts of Mumbai.

Kareena and Salman were expected to serenade to immortality in Sanjay Leela Bhansali's 'Bajirao Mastani', but the film never happened.

She was also signed for Salman's home production 'My Punjabi Nikaah'. That never happened either.

'Main Aur Mrs. Khanna' is an intensely romantic film. I don't think Salman has done a pure love story like this before. Neither have I. Sohail is also in the film.'

Interestingly, this is the first time in her distinguished career that Kareena will be working with a debutant director Prem Soni.

'He's very talented. It wouldn't matter even if he wasn't - I'm doing it for Salman,' said Kareena emotionally.