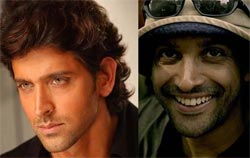 Featured Video
It’s entertainment – plain and simple.  One-hour of cutting edge humour, dazzling performances, news making guests, edgy style all rolled into one… it is the greatest entertainment extravaganza ever!

According to our source, “Hrithik Roshan will be the first guest and will share some light hearted moments with Farhan. And it will be a treat to watch Hrithik perform too”.

The buzz is also that Karan Johar will be the next guest on the show. “Producers are still contemplating on their lineup of guests for the show. They have spoken to Karan, but nothing is confirmed as yet”, adds our source.

Farhan is the first in the line of seriously irreverent, seriously interesting personalities that will host Oye…It’s Friday on Imagine.  These hosts will switch and swap over the course of the series and will surprise and entertain you week after week!

Your Friday nights are never going to be the same again, as Oye… It’s Friday premiers December 12th, every Friday, 10 -11PM…

Further it will be more interesting to track the show performance as it might start decreasing post 2nd or 3rd episode.

And now comes the best part..after such magnificent show format and splendid marketing activities they have managed to rope in only one sponsor i.e. presenting sponsor LG Mobile. The deal will be not more than Rs. 50 lacs.

The current situation can be summarized as

During these times when competition in GEC space is getting tougher and tougher, when all channels are fighting for same advertising pie, Is it wise to experiment on different formats like Raju Hazir Ho, Oye its Friday? Or its better to invest in a Fiction or Mass reality show which can sustain over longer period of time and it has continuity that will bring in audiences episode after episode. Especially when key channel driver RAMAYANA is nearing end, flirting with such formats will cost a lot to the channel.

+ 2
13 years ago omg hrithnks gonna come on.. i hope i catch it online considering i dont have ndtv..

+ 3
13 years ago they should seriously have put it on anothe chnanel, will try to catch online

13 years ago OMGGG....YAY!!
I HAVE BEEN WAITING FOR SOOO LONG TO SEE HRITHIK SOMEWHERE RECENT!!
OMG...I AM SOO EXCITEDD...I LOOOVEE HIMM!

+ 2
13 years ago sounds like an interesting show! too bad i don''t have this channel! boo.

13 years ago yayyy i love FArhan AKHter..he is soooo cuteeee:) m so happie..now my frdiays wont be the same as always...[:D]

13 years ago WOW that sounds good well am not much fan of the show or farhan but am going to watch the first epi coz of HRITHIK ohhhhhhh cant wait.....

13 years ago sounds like an interesting new show... will have to watch it!