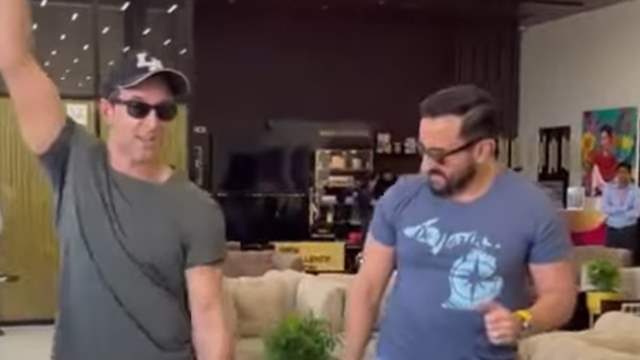 Bollywood actors Hrithik Roshan and Saif Ali Khan will be seen sharing screen space in 'Vikram Vedha' and fans are quite excited to see them together. The actors are on a promotional spree for the same and are leaving no stone unturned.

Hrithik shared a video on his Instagram account displaying their off-screen chemistry with each other. In this video, Hrithik is seen practicing his steps from the song 'Alcoholiya' which he seems to have forgotten. He asks Saif to join him while he teaches him the steps and the duo are seen bonding while having a good laugh. Hrithik wrote, "The Real Vikram Vedha behave like this 😄😂 Vedha forgotten the step , teaching Vikram all wrong 🤓"

Hrithik and Saif looked their best in the casual jeans and tee outfit and fans have already gone gaga over their off-screen bond.

The movie "Vikram Vedha" is a remake of the south Indian movie of the same name, in which R Madhavan and Vijay Sethupathi appeared. Hrithik hasn't, however, considered making analogies. He had previously said in an interview that he never considered comparisons. Well, the most awaited film is all set to release on September 30.