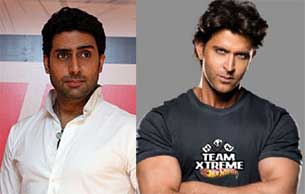 Actor Abhishek Bachchan is happy to know that Hrithik Roshan, who played a thief in "Dhoom 2", wants "Dhoom 3" to break box office record set by "Krrish 3".

Abhishek calls Hrithik an integral part of "Dhoom" family and says their aim is to provide entertainment to the viewers with "Dhoom 3".

"Hrithik is a dear friend. He is an integral pillar of 'Dhoom' franchise. He was a part of 'Dhoom 2' and he is a part of the 'Dhoom' family," Abhishek told reporters here Wednesday at the inauguration of OMEGA Co-Axial exhibition.

Ever since the "Dhoom" series came out in 2004 Abhishek has reprised the role of police officer Jai and Uday Chopra of Ali.

But villains have changed.

If John Abraham played the negative role in the first film, Hrithik appeared as the super thief in part two. In "Dhoom 3", Aamir Khan will be seen as a clownish thief.

" 'Dhoom' is essentially about Jai and Ali and every time we have a new villain to catch. But Hrithik is family, he is a friend. We don't really make movies for records. We make movies so that the audience enjoys them," he added.

Released Nov 1, two days before Diwali, "Krrish 3" has not only become the fastest movie in Bollywood to enter the Rs.200 crore club, but it has also collected a whopping Rs.255 crore worldwide in the 12 days of its release.

Abhishek said: "I am so happy with the records that 'Krrish 3' is breaking. I am very happy for him and very proud of him."