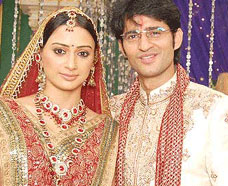 After hosting Nach Baliye together, the very popular on screen and off screen pair of Hiten Tejwani and Gauri Pradhan might be seen together on television, as the buzz is that they might soon enter Star Plus’ afternoon show Kumkum Pyaara Sa Bandhan.

According to our source, “Hiten and Gauri will enter Kumkum and will play the parallel leads in the show. They enter as business tycoons, and Hiten’s character name is Ranvir Singh while Gauri is Aditi”.

When we contacted Hiten for a confirmation, he said, “Yes, I am entering Kumkum along with Gauri. But I don’t know much about my track, and all I can say as of now is that I play a positive character”.

“As you all know, Juhi Parmar aka Kumkum is getting married in real life, and this track has been introduced to give her a break”, concludes our source.

Hiten Tejwani-Gauri Pradhan and Hussein Kuwajerwala were earlier seen as participants in the second season of Nach Baliye; and their chemistry in Kumkum has to be the highpoint in the show now!!

To know more about the track and their roles, watch out this space…

sumitkumkum4eve 13 years ago gosh i love this show soo much!
so glad that our beloved sumit is back na?

but they dont seem to be playing positive roles at the time...i hope that sukk are united soon <3

SA_HG 13 years ago Cant wait to see them. Im so excited they will be superb in the show. Love GHT alooooot. Waiting for episode to telecast...

+ 8
13 years ago @wackysharu: very true..let the Kutumb magic be backkkkkkkkkkkkkkkkkkkk!!!
aww..jst cant wait to see my jaanus Gauri n Hiten n kumkum..
awww..im gonna 2 start watching the show 4 da 1st time ever inspite f the fact i''ll have to stay up every night till 12.30am for the repeat as im out at college at ts regular air time @1pm..