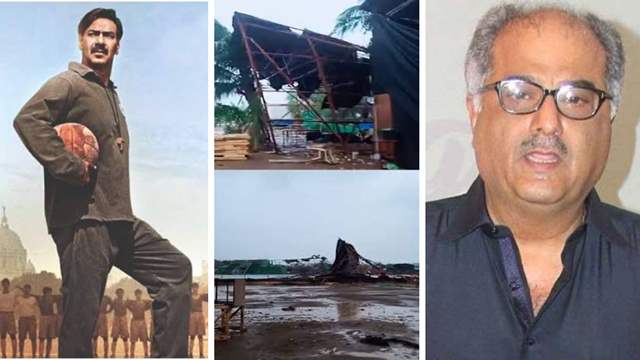 A few days ago, Cyclone Tauktae hit several states including Maharashtra and the heavy rains caused massive destruction in some areas.

The gusty winds and landfall also destroyed many film sets in Mumbai that were to be used by films like Salman Khan and Katrina Kaif starrer Tiger 3, Ajay Devgn’s Maidaan among others.

Maidaan producer Boney Kapoor opens up about having to reconstruct the film set for the third time. Speaking to ETimes, the filmmaker shared that the set had to be dismantled for the first time when the first lockdown happened, and he adds that if it was not for the lockdown, they would’ve completed the shooting of the film.

Kapoor shares that the set has been completely damaged due to the cyclone.

"The entire set is gone except the pitch. Though the pitch, too, has suffered some damage, the curator has assured us that he will manage to salvage it. But we have already incurred an expense of Rs 30 cr and work is still pending.”

A day ago, the producers of Maidaan: Boney Kapoor, Akash Chawla and Arunava Joy Sengupta issued a joint statement and confirmed that the film is not in talks for a digital release.

Speaking of Maidaan, the film is inspired by the true story of Syed Abdul Rahim, who was a football coach and manager of the Indian national team from 1950 till his death in 1963. Directed by Amit Ravindernath Sharma of 'Badhaai Ho' fame, the film also features Priyamani, Gajraj Rao and Rudranil Ghosh in pivotal roles.