Mumbai, Jan 5 (IANS) Harsh Chhaya, who was seen in Madhur Bhandarkar's 'Corporate', will play a gay fashion designer in his next movie titled 'Fashion'.

Harsh, known to experiment with all types of roles, plays a gay for the first time. It will be completely new from what his fans have seen him doing so far. 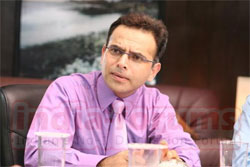 Priyanka Chopra and Kangana Ranaut are playing the female leads in the movie, which will delve behind the scenes of the flourishing fashion industry. Bhandarkar is co-producing it with UTV.

Interestingly, Harsh was not the first choice for the role as he was considered an actor with too serious an image. However, he was keen on the role and made an effort to get it.

'I just told Madhur to watch it for me, it did not matter if he cast me at the end of it,' Harsh said.

Apparently, Harsh bought a wig, clothes that he thought would be appropriate for a certain look, wore make up, plucked his eyebrows in shape and then shot himself on a video camera. He edited the five-minute piece and presented the DVD along with some stills to Bhandarkar. In a couple of days, the role was his!

'I put in an effort to get a certain part and I would sincerely like to thank Madhur for casting me finally.

'There are very few opportunities like this available to an actor in the span of his career. I saw one here and I had to at least try to grab it for my own sake,' he said.