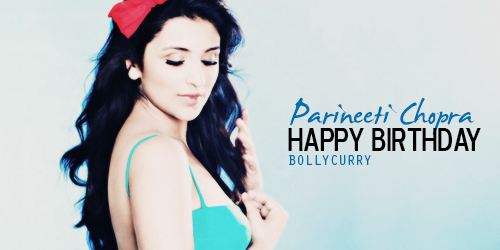 It's the 22nd of October yet again, a day which marks the birth of the stunning beauty, Pari aka Parineeti Chopra.


Chopra was born in 1988, to Pawan Chopra and Reena Chopra in Ambala, Haryana. Her father is a businessman; military supplier to Indian Army and the vivacious girl has two brothers - Shivang and Saraj. She is also first-cousin to Priyanka Chopra and Meera Chopra. Chopra completed her early education in Jesus and Mary Convent, Ambala. At the age of 17, she moved to London to obtain triple honours degree in Business, Finance and Economics.

In 2009, Chopra returned to India due to economic recession. She visited the Yash Raj Films' sets, where Priyanka Chopra was shooting for Pyaar Impossible (2010) and the sizzling star started working as an intern for Yash Raj Films Pvt, after being introduced by Priyanka Chopra. While working in the promotions of Band Baaja Baaraat (2010), she realized her interest towards acting. Eventually she made her debut with Ladies vs Ricky Bahl (2011) which also starred Ranveer Singh and Anushka Sharma. The movie was well received by critics and audience equally, and also earned her a Filmfare Award for Best Debut Female. Chopra's run in Bollywood continued with Ishaqzaade (2012) opposite newcomer Arjun Kapoor, earning her a National Award for Special Mention. The beautiful Chopra has acted in many other movies including Shuddh Desi Romance (2013), Hasee Toh Phasee (2014) and her most recent, Daawat-e-Ishq (2014).

Chopra has Kill Dil opposite Govinda, Ranveer Singh and Ali Zafar, which is slated to release on November 14th. She also has an untitled movie co-starring Saif Ali Khan in her kitty.

On her Birthday here is a playlist of some of her chartbuster songs:
Did You Know?
Here's BollyCurry wishing Parineeti Chopra many happy returns of the day, with the hope that she continues to shine and entertain her audience with her unique charm.