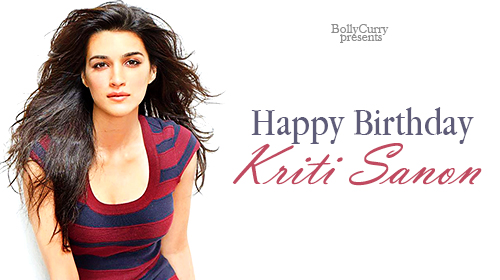 Birthdays are those days that come along with truckloads of joys and buckets full of wisdom. Today, BollyCurry is celebrating the birthday of one of the newbies of the Bollywood industry, who is as promising as they come - actress and model, Kriti Sanon.

Born on July 27, 1990 to a Chartered Accountant Rahul Sanon and an Associate Professor Geeta Sanon, this budding starlet has one sibling and belongs originally to Delhi. She completed her schooling from Delhi Public School, RK Puram and her Bachelors of Technology in Electronics and Communication from Jaypee Institute of Information Technology in  Noida, Uttar Pradesh.

Sanon made her acting debut with Sukumar's Telugu psychological thriller 1: Nennokkadine (2014), opposite the South superstar Mahesh Babu, where she portrayed the role of a reporter. She received mixed reviews for her role from audiences. The critics rated her performance and appearance as average. She then forayed into Bollywood with Sabbir Khan's romantic action movie Heropanti (2014). She starred opposite the debutante Tiger Shroff, alongside celebrated actor Prakash Raj as the main antagonist. The movie's story revolves around two young conflicting protagonists, their battles with society as well as their own family and the triumph of their love against all odds. The movie was a commercial success and Sanon was lauded by both critics and audiences for her impeccable screen presence. She was last seen opposite Naga Chaitanya in Sudheer Verma's Telugu action-crime film Dochay (2015).

A powerhouse of talent, Sanon proved her mettle and took the industry by storm by winning the Filmfare Award for Best Female Debut and the BIG Star Entertainment Award for Most Entertaining Actor - Female. She was also nominated for the Stardust Award for Superstar of Tomorrow - Female and the Screen Award for Most Promising Newcomer Female.

Sanon is associated with numerous brands and products, the likes of which include coconut hair oil Parachute Jasmine, a chocolate advertisement with Arjun Rampal, a cola brand and the renowned apparel brand American Swan. She has also recorded a video for the apparel brand titled "As I Am Anthem" alongside Sidharth Malhotra, a song that took to the youth's fancy.

Sanon will soon be seen in Rohit Shetty's action drama-comedy Dilwale along with Bollywood's heartthrob Varun Dhawan and the evergreen couple Shah Rukh Khan and Kajol. The movie is slated to release on December 18, 2015 and is highly anticipated by audiences worldwide.

Here is a small playlist of the actress to celebrate her birthday with pomp and show.

We, at BollyCurry, wish the stunning actress many happy returns of the day and hope that her upcoming projects highlight the abundance of talent she has within her.