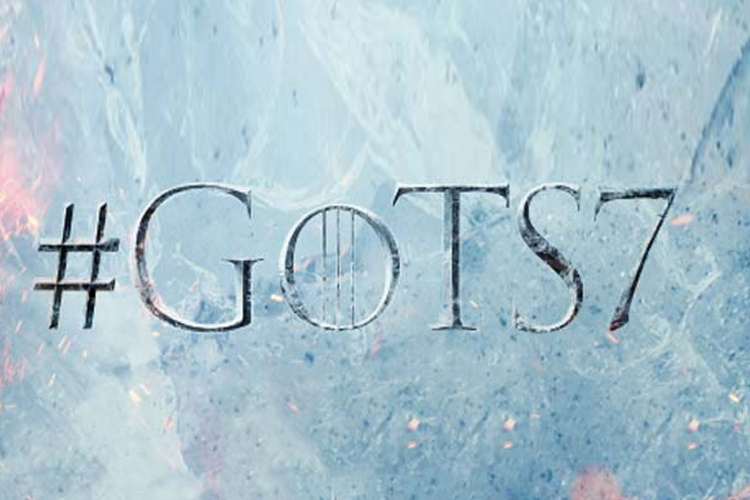 *Disclaimer: The following content is a light reflection and an attempt of simulation that leaves out any scope for critique.

According to Indian Standard Time, we are less than 24 hours away from the premiere episode of Game Of Thrones Season 7. This season has arguably been the most anticipated one! Of course, not only because we know that it's just 2 seasons before Game Of Thrones is no more a part of our life, but also because the wait this time was a really long one (about 385 days to be precise.)

So, before we get hooked on to our screens to experience the 'great war' of this penultimate season, we thought of playing some simulation games with our TV actors and thought what if our Indian TV actors were cast as the principal characters of Game Of Thrones.

I know reading at the headline and this line above, the thought must have crossed your mind that, haha Really? Indian TV actors as GOT characters?' So, before we cut to the chase, let's just keep those stereotyping thoughts aside and realize that this is a mere simulation and Indian TV actors deserve respect too!

Given a chance, they can perform to their maximum potential when needed. 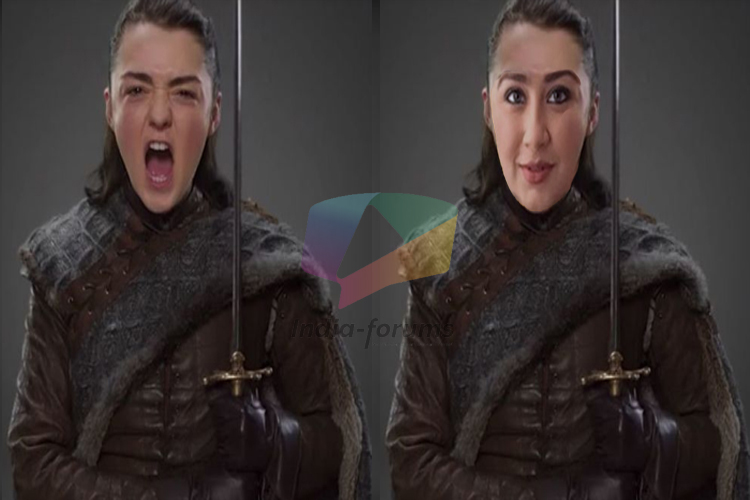 We begin with the tom-boyishly fierce and coming-back-home Arya Stark. The girl was a no one till the sixth season, but is finally heading home after killing The Waif. And we couldn't think of a better contender than actress, Aditi Bhatia aka Ruhi from Yeh Hai Mohabbatein. Apart from crying in the show mostly, there has been flashes of portrayal of some fierce and true emotions from the actress. And remember how she convincingly played Ruhaan, the rockstar before unveiling herself as Ruhi? Arya has followed through a similar journey and we are certain Aditi would do justice to the same! 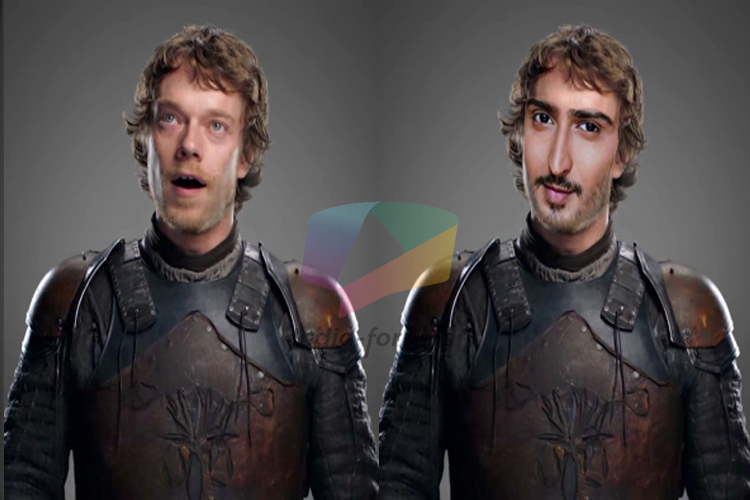 Amongst my favourite actors, Alfie Allen managed to make pathetic Theon Greyjoy loved at times. And when it comes to acting chops, actor Kunal Karan Kapoor has done the same. Having limited work to his credit, the actor has only done impactful roles and has made his characters memorable.
Ok! The fans of Kunal, please don't kill us for giving him a character who has his dick being severed in the show! But that's what we call enacting a powerful character and Kunal would convincingly do that. 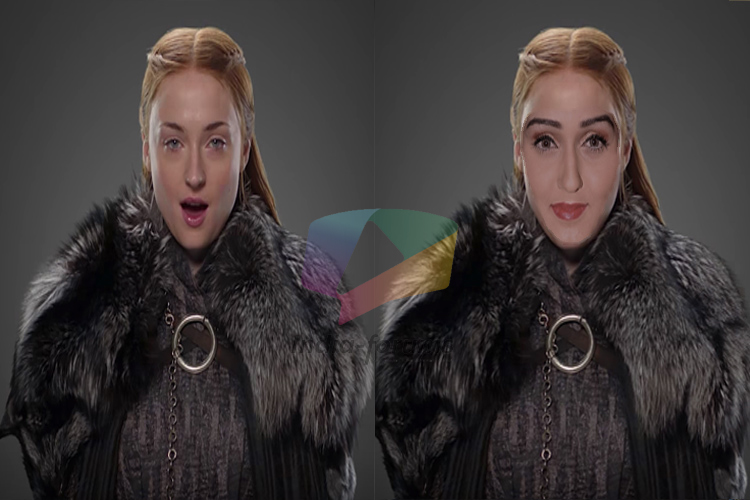 Yes! The height is a concern here, but we are not taking that into consideration. Actress Tanya Sharma maybe young, but has some fine acting skills, even though she has been a part of show like Saath Nibhana Saathiya. The rise of Sansa over the seasons has been phenomenal and Winterfell wouldn't be Starks' again, if not for Sansa's presence of mind to get the warriors of Vale into the Battle of Bastards. Apart from all that, there is one quality that Tanya convincingly fulfills than that is being beautiful. Sansa is known to be a desirable beauty and Tanya, we are certain completely fulfils the same. 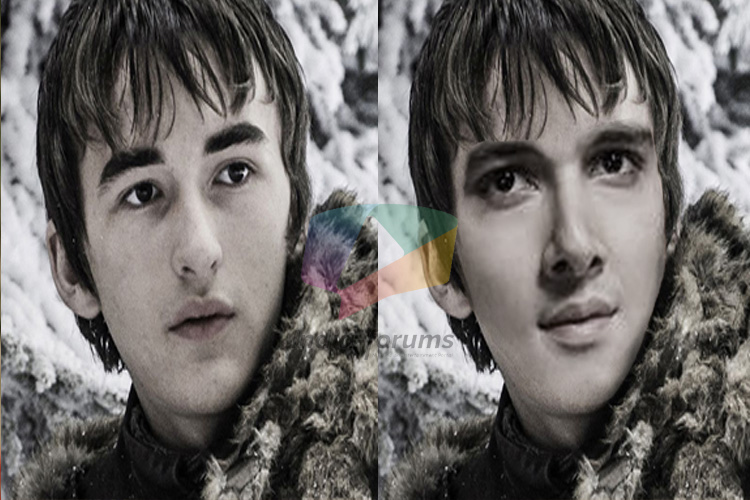 Having some intense discussion about how can Bran be, I came across actor Rohan Mehra's image and that was it! Infact, according to me, Rohan and Isaac have such similar looks that the former can as well qualify as an Indian doppelganger for the latter. So, the biggest reason to have Rohan playing Bran would purely be the actor's strikingly similar looks to Isaac aka Bran. 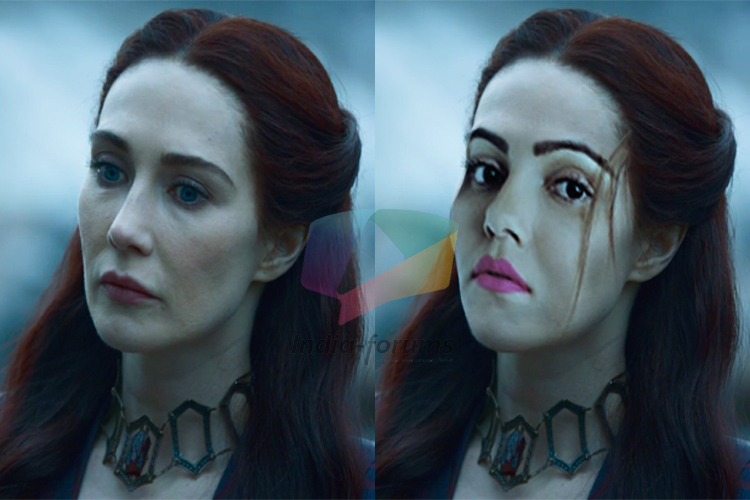 Beauty, mystery, magic and finesse is what determines Lady Melisandre aka The Red Woman. If it was not for Lady Melisandre, we wouldn't have been able to see Jon Snow, isn't it? And her job isn't yet done. There is a lot of mystery that still lies with The Red Woman. And when it comes to beauty and finesse, I couldn't think of anyone better than actress, Rubina Dilaik. Rubina's latest transformation of sorts which include her bold picutres denote that the actress is an absolute beauty! What is amazing about Carice and Rubina both is that, they make bold look aesthetic and not vulgar. So, there you have it! 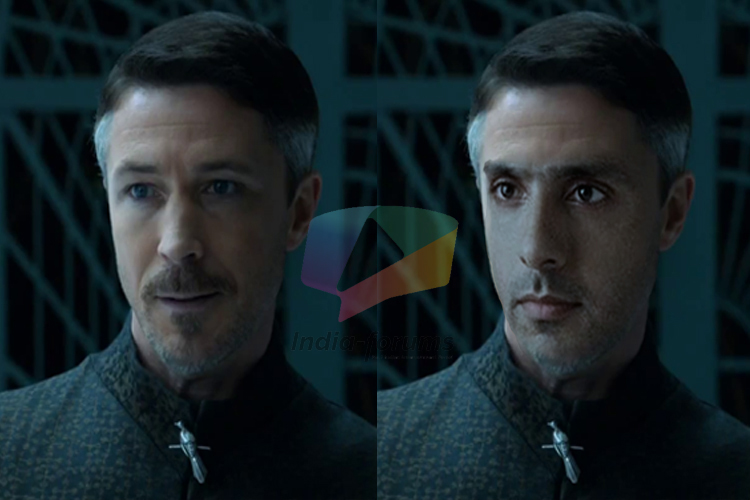 The man who has been responsible for the whole Game Of Thrones, literally! If not for Baelish aka Littlefinger's cunning yet smart ploys, the seven kingdoms would have been a better place to live in! But, we still love Littlefinger, don't we? I mean, Aidan makes the character so amazing, that we love to hate Baelish. And thanks to Iqbal's baritone voice and fabulous acting skills, we think he would make an amazing Baelish without a doubt! Of course, Iqbal will have to lose his bulk a bit. 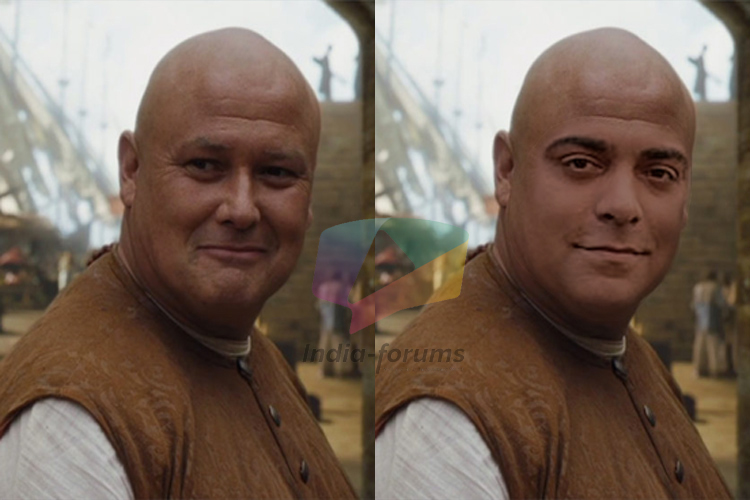 I don't know if you have come across the meme on internet which says that the real Game Of Thrones is between Lord Varys and Baelish. And I am sure, you couldn't agree more. If Baelish is bad, Varys is the good we look for. Having a similar mind and operation to that of Baelish, the difference is that Varys does things for the realm (so far, atleast). And the best one to play this character would be TV superstar, Ram Kapoor. Having a similar body posture, Ram would also underplay the character with conviction and of course, would have some fantastic witness to showcase too.

Karanvir Bohra from Naagin 2 as The Night King (Richard Brake) 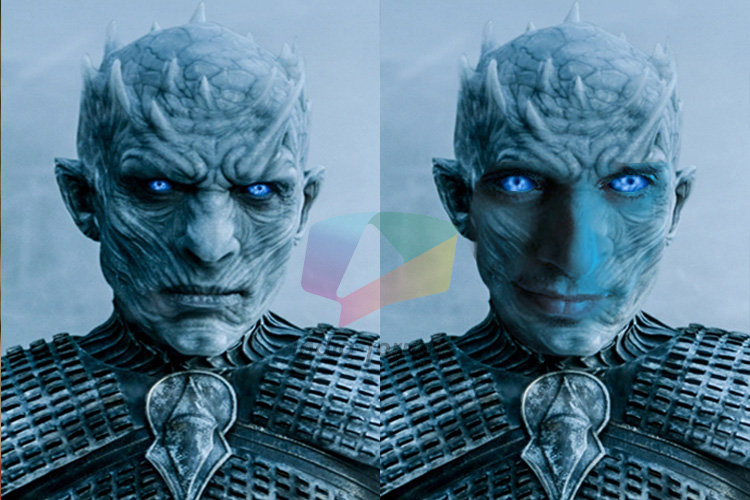 He is coming and he has actually come! The Great War is finally here and The Night King is leading it to kill one and all. Officially a part of our nightmares, The Night King is going to have a pivotal part to play in Season 7 and Season 8 (maybe). And when we talk about nightmares, one can totally remember how actor, Karanvir Bohra gave nightmares to the viewers by playing Viraj in Dil Se Di Dua... Saubhagyavati Bhava? So, he totally fits playing the Night King and would undoubtedly do complete justice to it. We are sure, you wouldn't have been able to decode looking at the image that it is Karanvir in that right side of the image. But, that's the point. I just wanted to tease that. Of course, Richard Brake, the actor playing Night King doesn't look like that at all too.

For the record here is Richard and Karanvir, in how they actually look- 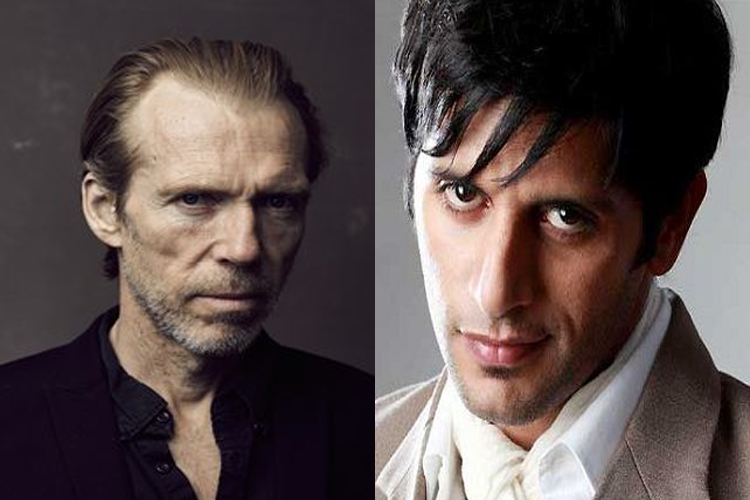 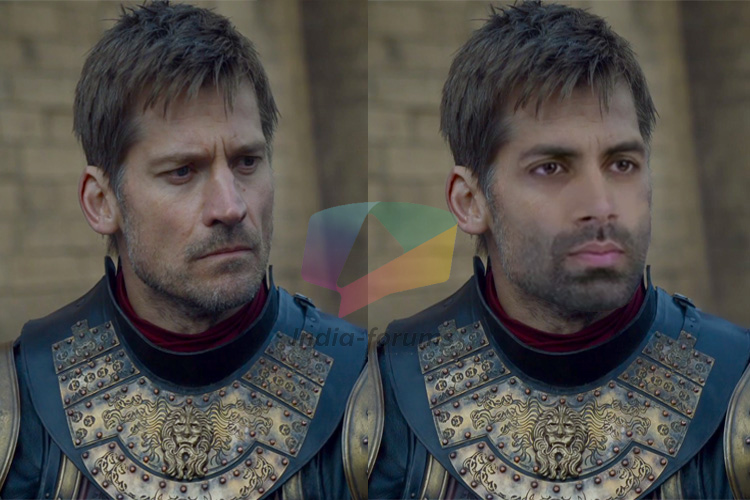 Handsome, formidable, tall and ruthless is what defines Jaime Lannister. From being the one we hated when he pushed Bran from the window in the first episode, we also started to like him for the few good deeds he did later. And even today, Jaime is undoubtedly the most desirable man in Westeros. So, who better than the heartthrob, Namik Paul to play the same?

Being tall? Check. Is handsome? Check. Has a jawline? Check. Is Formidable? Check Check Check. So, with 100% checks, Namik would certainly play an amazing Jaime Lannister! 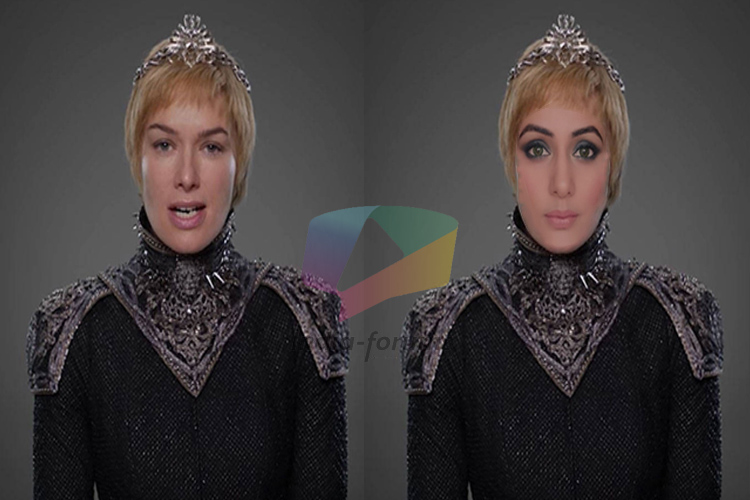 I know, many of you may have their eyes popped at this choice! But, I totally stand by this one too. After seven years of playing Akshara in Yeh Rishta.., we couldn't have been happier to see Hina Khan go glam and go bold in her latest Instagram posts. I would and I am sure many would love to see the former docile bahu play the cunning, ruthless and terrifying Cersei Lannister. Wow! I can imagine how Hina would raise the wine glass with some amazing expressions when Cersei set the Sept in fire with Wildfire. 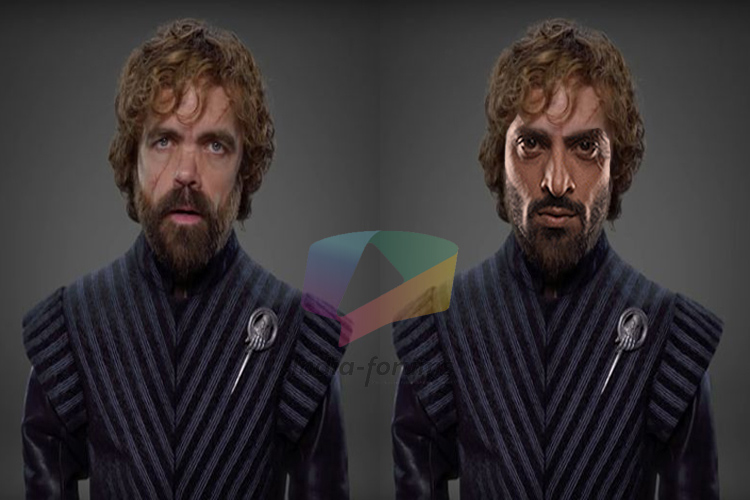 Of course, I know VIkkas ain't a dwarf. But, that is exactly why I cast him as Tyrion Lannister. We do not have someone as convincing and fantastic as Peter Dinklage, but nevertheless, a challenge to play Tyrion would be one for Vikkas to take up. Vikkas surprised one and all with the kind of transformation he went through for his character of Veer in Ghulaam and that dedication of his makes us believe that he would equally dedicate himself to become an amazing Tyrion, if not become a dwarf literally. 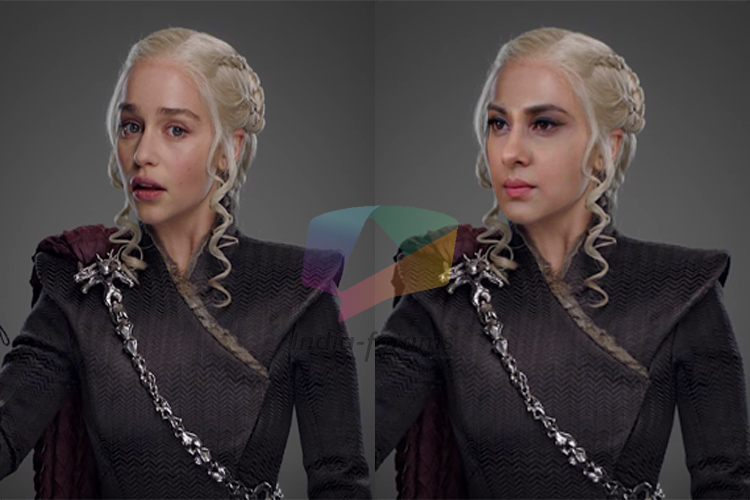 Yes! I know, you had that moment where you say, I thought the same thing. There cannot be a better Daenerys then Jennifer Winget (apart from Emilika Clarke, of course). Not only does Jennifer justify being an absolute beauty, but as we have seen Jennifer wow as Maya in Beyhadh; the idea of her speaking some Dothraki and Valerian would be an absolute treat, isn't it? Imagine Jennifer riding on a dragon? That's truly is amazing, isn't it? 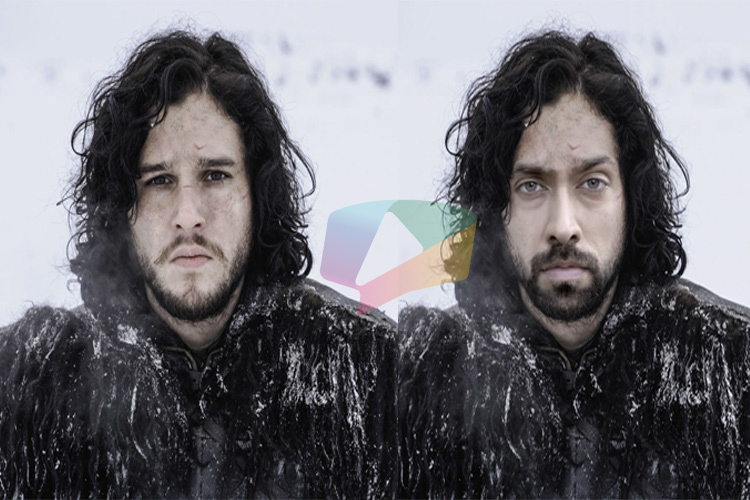 And finally, you know nothing Jon Snow! But, boy does he knows a lot of things now as he is the one who came back from the dead and The King In The North! So, who would play the pretty-boy-turned-king Jon Snow? The choice was obvious and it was none other than, Nakuul Mehta aka Shivaay. Nakuul is literally the only blue-eyed pretty boy on Indian television, who can be rugged too when needed. His chocolate boy looks combined with his fierceness would make him the perfect hero (Jon Snow) for the Indian peeps, wouldn't it? Just one other addition to the justification is how Jon Snow is a bastard and so is Shivaay Singh Oberoi. Fits, isn't it?

So, there you are. That is how we prepare ourselves for Game Of Thrones Season 7. And an Indian version with correct casting, apt treatment and fair approach wouldn't be that bad an idea, would it?

What do you have to say about the casting? Leave in your comments below..

"When The Snows Fall And The White Winds Blow, The Lone Wolf Dies, But The Pack Survives!"
p>*Disclaimer: The following content is a light reflection and an attempt of simulation that leaves out any scope for critique.
35 Likes

sunsetnvine 2 years ago Love Jennifer Winget & Nakul Mehta & Namik Paul.
But please no, it would be a disaster. the shows are better as original.

latanzia 3 years ago Heck no none of these actors suit the role they were given. IF please leave Game of throne out of your mess.

vivacious_gurl 3 years ago Really? Distorting faces of all actors n u think they suit the characters? Some of the distortions r hilarious... Please IF get some better articles

Ani_La_Iam 3 years ago Kunal Karan Kapoor is an outstanding artist that I would like to see much more of.

His face expressions and the way he dig into the skin of his characters are brilliant. ivybelicia 3 years ago Kunal Karan Kapoor rock in whatever he do. We miss him.

anjaanichudi 3 years ago Commenting here for Jennifer Winget, she wud slay any role she plays.

phoenix_edkv 3 years ago Love Namik Paul !!
Looking forward to your new show Namik :)
Come back soon with a bang

Sanjay Dutt Admitted In Hospital Due To Breathing Problems; ...
53 minutes ago