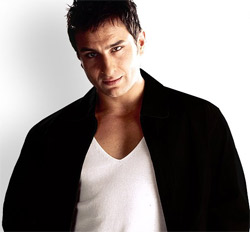 Featured Video
n’s tashan with Kareena Kapoor, but the chote nawab has denied these stories calling it mere rumours. “I don’t care what people say about our relationship. We have been together for nine months and we both know how much we mean to each other,” quotes Saif. The actor adds that his life was never been so good in the past. “I’ve so much to look forward to. I’m doing so well professionally. I’ve a great personal life,” amusingly adds Khan sahab. His last release Tashan, may not have fared well at the box office, but the film has made a special place in Saif’s heart. “It was great fun making Tashan and something really positive came out of it.


What’s that positive thing that came out of the negative jholi of Tashan? “I met Kareena during Tashan. That’s enough for me,” briskly replies the happy Khan.

But we still have little doubt about the glossy happiness Saif. It’s either Bollywood or happiness. But living in Bollywood without having haphazard cramps in relationship! Little gossipy dear.