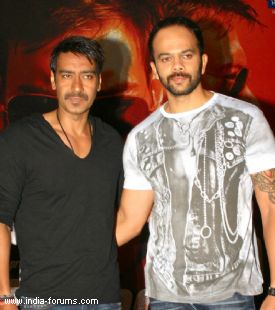 Panaji, Sep 9 With his force mired in a slew of scandals involving sex, sleaze, corruption, political patronage and drugs, Goa's top cop hopes that his men would pick up some lessons and morale from Ajay Devgn's character Bajirao Singham in Bollywood film 'Singham'.

Director General of Police (DGP) Aditya Arya has booked a 900-seater auditorium Sunday to screen the Rohit Shetty-directed film for cops, in the hope that the men in khaki will pick up some lessons from the super honest Bajirao Singham.

'It is to motivate the police to do the right thing. If somebody does the right thing, everybody is behind him or her,' Arya told IANS, commenting on the lessons he wanted his 5,000-odd strong force to learn from the screening.

'Singham', released in May, was shot in many locations in Goa and is about the police-criminal-politician nexus, something which the state's police is being increasingly accused of in recent times.

Several policemen were arrested for their links to the drug mafia, molesting women rescued from prostitution and for their involvement in a counterfeit currency racket.

Goa's opposition Bharatiya Janata Party (BJP) has also accused state home minister Ravi Naik of influencing a probe into the police-politician-drug nexus which his son Roy has been linked with.

Arya hoped that Devgn's 'one-man army'-style fight against corruption and interference by politicians in the administration of law would inspire his policemen to take cue.

'I want the police to get motivated and do the right thing. One person does wrong and the entire force gets tarnished,' he said.