View Profile
There may be murmurs around the release date of Ghajini being changed from 2nd October to a later day but our trade sources insist that there is no other option for the film but be postponed.

Says the source on condition of anonymity, "There is no way how Ghajini could make it to 2nd October. Ok, so it is a great time for release but then the film hasn't managed to make a kind of progress which would enable it to be ready for release on 2nd October. Aamir Khan has gone through quite a few accidents, minor as they may be, but all of that has adversely affected the film's progress."

Is the competition getting too heavy on 2nd October? 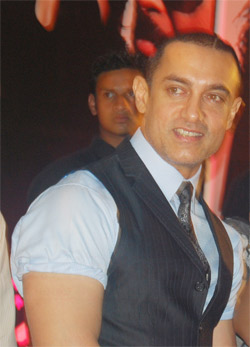 "It would be laughable to insist that competition would make Aamir move his film to a later date", quips the trade expert, "If Ghajini was ready then it would have scared all the other film makers who are bringing their films on 2nd October and not Aamir Khan. Even when Taare Zameen Par came alongside Welcome, the latter didn't take it too lightly. It is a different matter that both the films turned out to be blockbusters but if one looks at the kind of budget Taare Zameen Par was set in, the profit margins were huge."

Coming back to Ghajini, the source adds, "Drona, Kidnap, Wanted – Dead Or Alive – each of these films which are now sighting 2nd October – would have had to worry a lot more if Ghajini was coming on the same day. However, now they have to worry a lot more about how they want to avoid clashing with each other. Believe me, even as Ghajini is more or less out of the race, it is still not healthy for Abhishek Bachchan, Sanjay Dutt and Salman Khan to clash on the same day. May better sense prevail!"

So what happens to Ghajini then? When would it most likely release?

"I think this time around it is going to be a battle royal as Aamir and Shah Rukh may take each other hands on. Yes, it appears that Ghajini is looking at arriving with SRK's Rag Ne Bana Di Jodi on 12th December", concludes the source.