From Prem Rog To Sing Is Kinng

It may seem difficult to believe, but the director who has made Welcome and No Entry, is the same person who had made Pyaar To Hona Hi Tha and Deewangee. He is also the same person who assisted Raj Kapoor in Prem Rog three decades back and wrote the script for 51 other films. And of course he directed the recent hungama in Bollywood, Singh is Kinng. 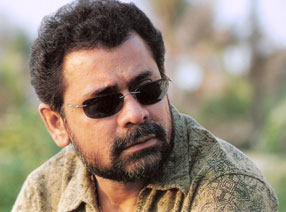 Welcome to the world of Anees Bazmee, who has seen the ups and down of the industry for more than three decades. Bazmee is back in news with his latest flick – Singh is Kinng – the story of a man who makes it big in Australia and how his life changes after that.

"Yes it has been a long journey for me and in the last couple of decades, I have done quite a mixed bag of movies and have enjoyed making all of them be it the romantic Pyaar To Hona Hi Tha or the thriller Dewaangee," says Bazmee while speaking just before the release of Singh is Kinng. He has no qualms in admitting that he makes movies for the public and wants them to enjoy it thoroughly. "I want my audience to come out of the theater and say that they enjoyed the movie from start to finish. That is why I love making comedies. However, I do not want to restrict myself to just one genre," explains the gleaming director.

In Singh is Kinng, Bazmee teams up with Vipul Shah, an acclaimed director himself. "I was lucky to have a producer like Vipul. He, being a director himself, knew precisely what I would need and made sure I had that. At the same time, he never interfered in my work. I think if Singh is Kinng is being released on time, it is just because of Vipul," says the director who has been very often blamed for the delay of his films.

Like other Anees Bazmee movies, a large part of Singh is Kinng has been shot in Australia and other exotic foreign locations. "There are a couple of reasons behind that. Firstly, it is much easier to shoot abroad than in India! It is easier to get permissions there than here. And secondly, I want my audience to transport to a dream world. I don't want to make movies that reflect the society we live in. We have enough of it in the real life," explains the director known for his fantastic song and dance sequences. "Songs are an integral part of Indian cinema and of course a very important part in all my films. And I find nothing wrong in that. Today, songs come first in the promos and audience prefers to judge any new film after seeing the songs," explains Bazmee.

Anees Bazmee movies have always had a heavy star cast. Singh is Kinng is no different with Akshay Kumar, Katrina Kaif, Om Puri, Neha Dhupia, Javed Jaffrey, Sonu Sood and Ranbir Shorey in the casting list. Is it because of the starry tantrums that his films get delayed? "Not exactly. It is because of other technical and planning issues that my films get delayed. I am very honest with my actors right from the beginning. I tell them exactly what they should expect in the role and the significance of it as well. So when they come on sets they are prepared. I do not lie to lure actors into my film," says Bazmee with a lot of commitment and conviction.

Bazmee is currently working on a film called It's My Life starring Genelia D'souza and Harman Baweja and hopes to go ahead full throttle with the flick after Singh is Kinng is set well up in the city theaters.