Enjoy the hot Koffee with Karan's special celebrities of the week.. 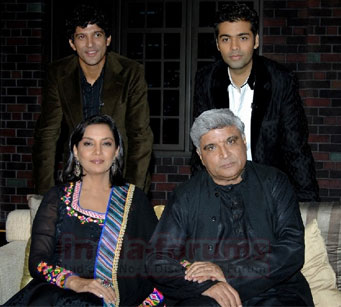 Featured Video
This week Koffee will be brewing with rich intellectual talks as the special guest in there will be none other than an extremely culturally rich special couple. She is an actor par excellence..From an unconventional cinema to plausible mainstream she has conquered all. Her contribution to the society as well as the fraternity has never gone unnoticed and on a lighter vein, she can be the life of a party. Her counterpart can weave words into a beautiful poem and has the best sense of humor.

This week meet Javed Akhtar and Shabana Azmi in Koffee with Karan and joining them is none other than their son the new Don director Farhan for a quick cuppa.

The very opinionated and individualistic couple talks about their warm relationship of 23 years. They are so different yet have some similarities that makes living together all the more interesting. Shabanaji busts the myth that poets are romantic and declares on the show that Javed saab does not have a bone of romance in his body! She also shares her passion for collecting recipes even though she hardly ever cooks! Farhan and Javedsaab talk about the healthy friendship they share with each other. Karan asks Javed saab what he thought about Don and how he reacted when Farhan told him he wanted to remake it. The father-son duo also gives their reaction to Ram Gopal Verma’s remake of Sholay!

After question-answer session the interview sparkled and sizzled with some quickies with typical Karan kind of questions. Find out on this Sunday’s episode of Koffee with Karan…

Which film, besides Don, deserves a remake according to Javed Akhtar?
Which recent song does he wish he had written?
How would he describe Koffee with Karan in a couplet?
Which Don does he prefer- the old one or the new one?
Who according to Shabanaji is the most talented actress in Indian cinema?
Who according to her is the most stunning looking woman?
If she had Sonia Gandhi’s private number, what would she like to tell her?
Who is the winner of the most desired possession on the show - the coffee hamper!

Excerpts from the interview:
Karan: I am very nervous today because I’m feeling compelled to sound very clever and intellectual and very social… socially relevant!
Shabana Azmi: And I am feeling very nervous because I am compelled to be very frothy and light!

Karan: You both have opinions that you like to express… you’re not afraid to express them. You both are individualistic in your own way and yet you have had a tremendous marriage. A marriage based on friendship. How have these 23 years been?
Shabana Azmi: I think we meet so rarely that, that is the reason for the success of the marriage. But also because I think we share a world view, we belong to similar backgrounds and because we are friends, more than anything else.

Karan: Why? You’ll are both that busy?
Javed Akhtar: Yes!
Karan: So basically it’s a phone marriage!
Shabana Azmi: And we meet at airports once in a while!

Karan: Do you’ll agree on things? Like your opinion on films? Do you both have the same opinions?
Javed Akhtar: No, no, no!

Karan: Because once Shabanaji saw a film that didn’t do very well and she came and said, ‘Bhai, the bad news for this film is that I have liked it!’
Shabana Azmi: There are director friends of mine who live in terror when I see a preview because if I’ve liked it, it’s really doomsday for the film. That is standard…

Karan: Which is the one big fight you have had over a film or a political situation... Something because of which there was war at home?
Javed Akhtar: There was a film in which Shabana was the leading lady- Ek Pal. It was made by Kalpana Lajmi. It was appreciated by many people but I didn’t like it. They thought that it was about women empowerment but it was not my definition of women empowerment, their individuality and their assertion.
Shabana Azmi: The good thing is that Javed is truly a feminist. He is a confident enough feminist, not to want to be politically correct. He genuinely feels it.

Karan: Farhan, how do you perceive them as a couple?
Farhan Akhtar: They seem extremely happy for many many years now. It’s fantastic!

Karan: Javedsaab and you almost have like a healthy friendship. The interaction is almost hysterical, every time I’ve seen you’ll together its like two friends chatting… warring maybe at times, maybe the conflicts. Seems like a friendship, which is tough when there is a generation gap.
Farhan Akhtar: Yeah I know! Shabana calls me like a chamcha of Pa because I keep laughing at all his jokes but I don’t think I’m the only one. All of us do!
Javed Akhtar: You know so often people have told me… there is only one person in this world who is funnier than you and that is your son!

So, don’t forget to tune in as Karan catches up with the super- talented couple- Shabana Azmi and Javed Akhtar along with son Farhan Akhtar on Koffee with Karan this Sunday, August 12, 2007 on Star One and Star World, at 9 pm

sourabhbhavsar 14 years ago oooooooooh this is intersting! now thats something to watch!

14 years ago some sensible people & not just some stupid gossip & fake laughter.

farhan looks hot , i wish i was a chick , he looks really hot.

14 years ago omo omo! Tis week KW looks fantastic! Looks like a muss watchh.! and FARHANs guna be there- def a muss watch! =)

14 years ago I will surely watch it only for
F A R H A N. He is most wonderful but rare and precious like Kohinoor, you don't see him easily. From since Nach Baliye One missing him.

+ 3
14 years ago This is one episode I am going to make sure not to miss. Just the very presence of Javed Saab makes any show at its best!!