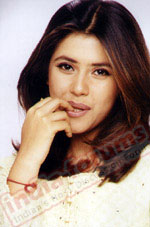 She has launched dozens of shows on Star Plus and Zee TV, captivating the hearts of millions of television viewers across the country. Now, it seems the queen of soaps Ekta Kapoor has her eyes set on Sony TV.

Of late, especially after Sandeep Sickand left Sony, the television tycoon has been taking keen interest in making shows for the channel. While Balaji serial "Khwaish" is already on air, sources say about three more shows are in the pipeline.

Buzz is that the sudden shift in focus is because Ekta's top actors like Prachi Desai, Ronit Roy and Jai Bhanushali are participating in "Jhalak Dikhla Ja", in which papa Jeetendra is also a judge. "With her involvement in the channel's programming, Ekta has already occupied the hot seat," said a source. But then, why not? Her serial has already pushed up the TRPs of the channel.

Another speculation is that the reason behind her tilt towards Sony is because her serials on Star Plus and Zee are not doing too well these days. However, a source differs: "Ekta is the queen of soaps. Whatever be the matter, she is enjoying very good TRP for all her shows. It is just that she is spreading her wings and not limiting herself to a few channels."

Ekta finds supporters in her actors and crew as well. Jai Bhanushali, one of the participants in "Jhalak Dikhla Ja" and the lead of "Kayamath", says: "Ekta never stops us from doing anything we want. She told us that if we can manage it then we could go ahead and work with other channels and media houses. She said we should just see to it that our work does not get affected. Ekta wants her work to be perfect and that's it."

A few months back, when Ekta launched Dhoop, she was asked if it were an alternative to her serials just in case they flop. Her reply was much in the face. "Yes, may be you all can consider this as an alternative as my serials are not doing well." Quite a clever businesswoman this.