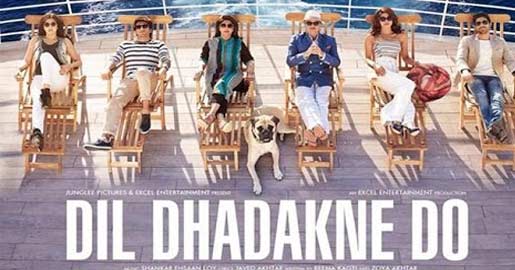 The theatrical trailer of "Dil Dhadakne Do" has been viewed over one million times on YouTube in less than 24 hours of its release online, and the numbers are only growing with plaudits from commoners as well as celebrities.

The Zoya Akhtar directorial is about a dysfunctional Punjabi family on a cruise across the Mediterranean.

The trailer, which was unveiled on Wednesday, shows actors Anil Kapoor, in salt and pepper look, and Shefali Shah as parents of Priyanka Chopra and Ranveer Singh. While the parents want Ranveer's character to get hitched, they hope their daughter doesn't split from her husband, played by Rahul Bose.

The 172 seconds-long video has been praised by veteran as well as young Bollywood celebrities. Here's what they've tweeted:

Karan Johar: The trailer of #DilDhadakneDo ...Too much fun!!!!!

Punit Malhotra: LOVE the promo of Dil Dhadakne do! Full marks to the cast and crew!#DilDhadakneDo

Dia Mirza: I love you Zoya Akhtar!!!! Wooohooo can't WAIT for this one #DilDhadakneDo

The movie, which also features Anushka Sharma and Farhan Akhtar, will hit the screens on June 5.