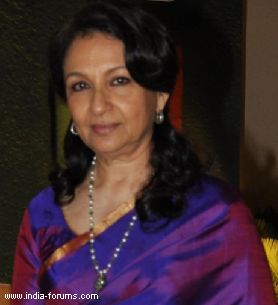 Veteran actress Sharmila Tagore says she never expected that two of her children - Saif Ali Khan and Soha Ali Khan will take up acting as a profession.

"We (Mansoor and I) thought that she (Soha) would follow an academic career. Earlier she was working with Ford Foundation in the developmental field and after that she started working with Citibank. Then we thought maybe she has changed her mind.

"But then she started showing interest towards working in films and her first film was a Bengali film, which I was quite happy being a Bengali," Sharmila told reporters here Tuesday at an event by Clinic Plus to celebrate Mothers' Day.

She says as parents, they were always supportive of their kids.

"We didn't expect Saif also to go into the films because both of them were kept away from films completely. But films is what they chose and we were supportive," she added.

Soha made her acting debut in 2004 and she was last seen in "Mr. Joe B. Carvalho" this year, while Saif, who is a National Award winner, made his acting debut in 1992 with Yash Chopra's "Parampara".

Currently, he has the upcoming films "Humshakals" and "Happy Ending" in his kitty.