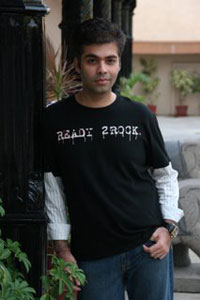 Featured Video
Johar's Dharma Productions has signed an exclusive worldwide distribution deal with UTV Motion Pictures for its next two releases. The deal includes theatrical, home video, overseas, satellite and all other new media distribution rights. The two films namely Wake Up Sid and Rensil D'silva's untitled film are slated to release in the second half of 2009.


Wake Up Sid is directed by Ayaan Mukerji and stars Ranbir Kapoor and Konkona Sen Sharma. The music of the film has been composed by the celebrated trio Shankar-Ehsaan-Loy. Rensil D'silva's film stars Saif Ali Khan, Kareena Kapoor and Vivek Oberoi and the music has been scored by Salim-Suleiman.


"Karan has a brilliant slate of films to his credit. He brings a tremendous entertainment quotient to his films coupled with immense understanding of the pulse of the audience. His films are amongst the most awaited across the country and around the world. We are thrilled to start what we hope is the beginning of a long relationship with Dharma Productions.", said UTV CEO Ronnie Screwvala


"I've known and been in touch with Ronnie for a long time now and I am glad that finally we are getting a chance to work together. His passion and sensibility towards understanding cinema is exceptional and I'm looking forward to working with UTV Motion Pictures", said Karan Johar .