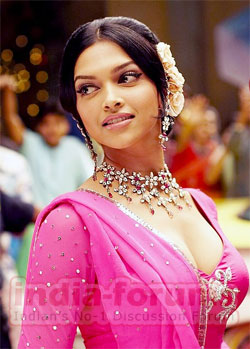 Mumbai, April 15 (IANS) Director Nikhil Advani, who has been shooting with hectic celerity in China for his new action-comedy 'Chandni Chowk To China', confirms that Deepika Padukone is playing double role in the movie.

'That's right,' confirmed Advani. 'Deepika is doing a double role in my film.'

This would be Deepika's second double role after her debut 'Om Shanti Om'.

When quizzed him about the music of the film, Advani told IANS: 'While the rest of the score by Shankar-Ehsaan-Loy, with a little help from Kailash Kher, is completely original, we've used Bappi Lahiri's 'Bombay se aaya mera dost' from the film 'Aap Ki Khatir'. Bappi has reworked and re-sung the song.'

Advani's directorial debut 'Kal Ho Naa Ho' was a runaway success at the box office, but his second film 'Salaam-e-Ishq' was letdown.

'Chandani Chowk to China' is a mega-budget film and is produced by Warner Brothers and Rohan Sippy.